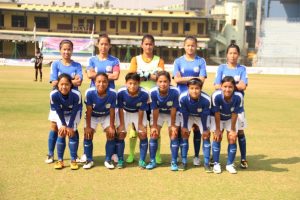 After reaching yet another final at the 23rd Senior Women’s National Football Championship 2017-18, Indian Women’s National Team player and Manipur captain Bala Devi believes that the Manipuri women’s football ‘is in good hands’.

“Women’s Football in Manipur is in good hands. The setup in the state has been supplying female footballers to the national teams’ year after year. And the future also looks strong”, described the forward.

A record 19th title is on the horizon for the team and this is apart from the absolute dominance shown in the lower age group levels. “The girls are winners. I’m not being overconfident but the girls have all won trophies and national championships at the sub-junior and junior levels. So they know how to win and want to taste the joy of winning over and over again”, quipped Bala.

“Some of the girls are already in the national team setup. There is healthy competition from within the state. If you are not good or can’t play at the same level, others are ready to take your place”, added the player of the match in the quarter-finals.

Another regular at the national level, Prameshwori Devi had her take on the Manipuri surge, “Talent can take you places but you also need proper support. Right from our parents to family to the state officials. We have received continued support to pursue our dream.”

“Success cannot be overnight. You need proper coaching and understanding of talent. Fortunately for the girls in Manipur there is no lack of coaches helping them out”, added Prameshwori.

“Lastly, I got the player of the match award in the semis against Railways. Not because of me but because of the help of all my team mates. We help each other out and improve together in Manipur”, signed off the diminutive midfield general.