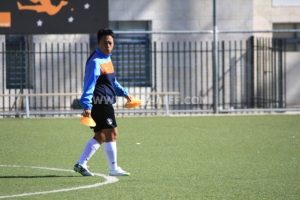 Chaoba ‘Ojha’ Devi, the bagpiper of Manipur Girls’ Football is basking in the glory of lifting another Junior National Championship glory – the third in a row. The veteran Coach, an employee of the Government of Manipur had also guided Manipur women to clinch the National Games Gold Medal. In a freewheeling interview to AIFF Media, Chaoba, who has been an Assistant Coach with the Indian Under-19 National Team spoke at length about the hard work, the team spirit, the future stars, the obstacles and a lot more.

Who do you dedicate this win to?

I would take the opportunity to thank AIFF for organising the Tournament and Football Association of Odisha for conducting it with utmost precision. The girls worked very hard to make it happen. They deserve due credit. The win was accomplished purely because of the hard work put in by the girls. The win is for our State — for all the Manipuris.

Except the final, Manipuri girls ransacked their opponents in every match. Were the girls a bit nervous ahead of the Final?

Perhaps Haryana dished out their best brand of Football in the Final. The counter-attack move from which they scored was simply terrific. Nevertheless, our girls recovered fast in the second half to help us garner the result. At the end of the day winning matters! By God’s grace we have done it again, even against an opposition like Haryana.

National spotters have identified a few Players from your Team. How much satisfaction does it provide you?

It is definitely a good advertisement for our Team and our State. Manipur has been synonymous to supplying Ball Players to the National Team since long. Ratanbala, with 22 goals in the Tournament stole the show in Cuttack. Once given the opportunity, she has the tenacity to prove it on the bigger stage and I have higher hopes for her. The concerted Team effort earned us the silverware.

Are there any hindrances which are bothering you?

To be frank, there are a lot. There are Players in abundance in Manipur and we need to provide them with infrastructure to hone their skills. A Good quality pitch will do wonders for them for our practice sessions. But it all depends on funds. But we will never compromise on achieving our target.

A good sleep (laughs). We’ll head back to Manipur. After a few days rest, I’ll start my work again. I just can’t stay far from the Football ground for long.