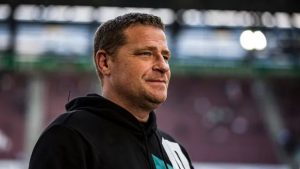 RB Leipzig have announced that Max Eberl is to become the club’s new sporting director. The 48-year-old has signed a long-term contract with the club and he will assume the role on December 15, 2022. Eberl will be officially presented in a press conference in mid-December 2022.

Max Eberl was born in Bogen, Bavaria. He started his footballing career in the FC Bayern youth academy and after a spell in the Bayern Munich Amateure side, he finally made his Bundesliga debut on October 19, 1991. He was with FCB until 1994, before he moved to VfL Bochum. Then in 1997, he moved to SpVgg Greuther Fürth, before he switched to Borussia Mönchengladbach on January 1, 1999. His spell at Borussia was the longest of his career and he made 146 competitive appearances for the Foals. He was also a part of their promotion season in 2001. He made a total of 104 Bundesliga appearances for FC Bayern, VfL Bochum and Borussia Mönchengladbach.

He retired as a player in July 2005 but by that point he had already had six months experience as the director of Borussia Mönchengladbach’s youth academy. In October 2008, he became Gladbach’s sporting director and he then became a part of the club’s executive board in the summer of 2010.

RB Leipzig CEO Oliver Mintzlaff said, “We have acquired our dream candidate for the role of sporting director in Max Eberl. We have been in talks for some time with Max but we have also been aware of his difficult personal situation. We are therefore delighted that we can start working together from December.”

“After his press conference in January this year, I contacted Max to send my best wishes. I reached out a little while after, but he expressed the view that he needed a break from football and that he needed some time to himself, but we arranged to get back in touch with each other in the summer. From there, Max confirmed that he would be interested in our proposition but that he did not want to get involved before 1st July 2023. This somewhat opened the door for us and we are delighted that we have come to the agreement to begin in mid-December.”

“Max is a football expert and he has a fantastic network. He is a well respected name in the industry, both in Germany and internationally. During his many years at Mönchengladbach, he demonstrated how to build a club and how one can find solutions during difficult moments. He has proven himself as an expert in the transfer market and that he can also nurture talent. He has achieved a lot of great things and has been highly successful in his work.”

“It has taken us a while to fill this position, which has been vacant for almost one and a half years. It was always important for us to find someone who can develop RB Leipzig in the long term and to find someone who can take the club to the next level. This exactly what we have found in Max. I would also like to use this opportunity to thank Borussia Mönchengladbach and Stephan Schippers for the honourable discussions.”

“Finally, I would like to stress that our sporting management, consisting of Christopher Vivell and Florian Scholz, also supported by Frank Aehlig, did some great work during this time and filled in brilliantly.”

New RB Leipzig sporting director Max Eberl said, “I’m really happy that my move to RB Leipzig has been announced today. I am thankful for the time I was given to recover; I feel ready and have the strength needed to want to work in football again. I’m coming to a club that has developed incredibly over the last few years, is really ambitious and stands for a clear style of football. There’s so much potential here, both at the club and in the whole region.”

“The chance to use and develop this potential is incredibly exciting for me. Similarly, my conversations over the last few weeks with RB Leipzig and Oliver Mintzlaff were also positive, and the fact that the club totally respected my decision to take a break until after the World Cup just made it clear to me that I wanted to take his role on.”