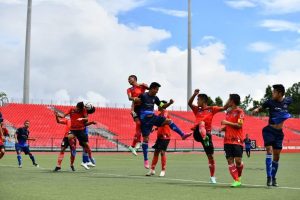 Two first half goals from Mizoram Police were enough to give them their first win of MPL-9 on Tuesday in a 2-1 win against Electric Veng FC.

It took Mizoram Police just two minutes to get off the mark with defender Lalrinzuala Khiangte striking the ball into the net after taking advantage of their opponent’s inability to clear the ball out of their box from a set piece.

Lalhmunmawia then added their second on the 19th minute with Lalhmunmawia applying a deft touch to guide home a delicious freekick delivery from R. Malsawmtluanga.

Electric Veng were given a new lease of life shortly after the break as they capped of a perfect team move with a header from David Lalchhuanawma.

They came close to finding an equaliser late on with Police goalkeeper F. Lalmuanawma saving from H. Zawnhmingthanga.

The Police team will now come up against Chawnpui FC on Thursday evening while Electric Veng FC take on Aizawl FC on Friday.