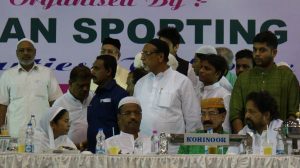 Kolkata side Mohammedan Sporting Club bestowed the honour of the Shan-e-Mohammedan to Prasun Banerjee for his overall contributions towards the 125-year-old club.

“It is a proud moment for me, I am honoured to receive this prestigious award from the club, which have a special place in my heart,” Banerjee said after receiving the award and cash prize of Rs. 1 lakh (100,000) from the West Bengal chief minister Mamata Banerjee at the iftar party organized by the club at Khudiram Anushilan Kendra in Kolkata on Monday.

Prasun Banerjee, who is the younger brother of legendary coach P.K. Banerjee, has worn the legendary black and white outfit for only one year (1981), but in that short period of time he left an everlasting impression in the minds of the club supporters. 1981 is regarded as one of most successful seasons in the club’s history, and Banerjee played a pivotal role in it. That year Mohammedan Sporting won the Calcutta Football League for the first time since 1967, and remained unbeaten throughout the tournament by winning 24 out of 26 matches played.

Mohammedan Sporting also went on to win the Sanjay Gandhi Gold Cup in Patna and became joint winners of the Stafford Cup with East Bengal in Bangalore, in both of those competitions Banerjee was instrumental.

Banerjee, who is the first Indian footballer to be elected to the Lower House of the Indian parliament, enjoyed a lot of success at international level as well. He was an integral part of the Indian team that reached the quarterfinals of the 1982 Asian Games. Banerjee has also represented India at the 1974 and 1978 Asian Games and was conferred with the Arjuna Award in 1979.