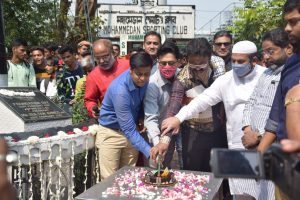 Mohammedan Sporting Club on Tuesday, February 22 celebrated the 130th Foundation Day at the Club tent on the Kolkata Maidans in the midst of much fanfare.

The club also organized a voluntary blood donation camp in association with Project Life Force (PLF), in view of a shortage of blood reserves across the state during the corona pandemic.

“We express our immense gratitude to all the donors who took out time inspite of their busy schedules and made this blood donation camp a great success. It was so heartening to see that many people have donated blood generously,” said Danish Iqbal.

Previous SC East Bengal look to get back to winning ways against NorthEast United FC!
Next Is Kylian Mbappe the Best Player in the World?