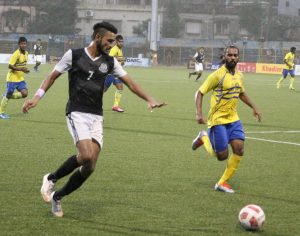 Going into the match coach Mridul Banerjee fielded an unchanged team from the previous match against Bhowanipore FC.

Mohammedan Sporting started off aggressively and surged ahead within just ten minutes into the game when Manvir slotted home off a Dipendu Dowary pass.

Having scored, Mohammedan Sporting increased the pressure on the rival defence and it yielded another goal just past the half hour mark when Manvir scored from Atinder’s pass to give his team a two goal advantage before half-time.

Mridul Banerjee’s men began the second-half strongly and just four minutes into the half they virtually finished off the match after Atinder converted from a brilliant through ball played by Leonce Dodoz inside the George Telegraph box.

Thereafter, Mohammedan Sporting dominated the majority of the proceedings and in the process several chances fell for Dodoz and Manvir but the duo lacked the finishing in the final third, otherwise the scoreline would have been much bigger.

Then, substitute Parminder, who replaced Manvir, rounded off the tally scoring off a Dodoz pass in added time.

After this 4-1 win Mohammedan Sporting moved up into third spot of the Calcutta Football League’s Premier Division – A with nine points from four games and will take on Aryan Club on Saturday, August 20 at the same venue.