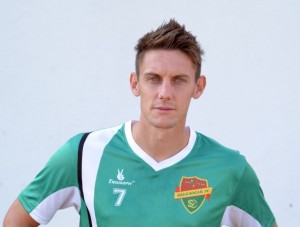 On joining Mohun Bagan, Darryl Duffy said, “I am very glad to be coming to a club which has won the I-League and the Federation Cup in the last two seasons. I hope I can do my best here and help them continue to win titles. I have played in Kolkata but it will be a great challenge playing for a club in Kolkata as I love the passion of the fans there. I am looking forward to arriving with my family in Kolkata as soon as possible”

32 year old Linwood (Scotland) born Duffy has spend three seasons with Salgaocar FC and in-between was on loan with FC Goa in the ISL-2 in 2015.

He was honoured as the Joint Winner of the 2013/14 I-League Golden Boot by netting 14 goals for Salgaocar. Duffyl also won the FPAI Foreign Player of the Year Award in 2014. He has been Salgaocar’s top scorer in every season since his arrival to India.

Delighted to officially announce that I've signed for @Mohun_BaganAC for upcoming CL & @ILeagueOfficial can't wait to get started!

Head Coach Sanjoy Sen said, “Since my days as United Sports Coach, I had an eye on the Scottish striker, last two seasons he was in good form and had a consistent scoring record at Salgaocar FC, the kind of football Mohun Bagan Team displays Duffy’s addition will add more flare to it.”