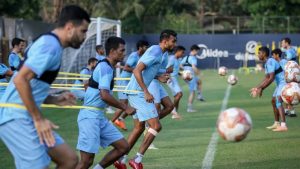 The reverse round of fixtures started on a tough note for the Islanders who ran into a well set-up Hyderabad FC and mustered a point from a thrilling encounter at the Bambolim. In a night of missed chances for both sides, the Islanders could count on the skipper Amrinder Singh who pulled off two stunning saves to keep the Nizams at bay and helped Mumbai City towards a draw that helped set a new club record for an unbeaten run, now reading at 10 games.

Robbie Fowler’s SC East Bengal come into tomorrow’s clash on a strong unbeaten run of their own, having not tasted defeat in seven successive games. The Red and Gold brigade are a fresh of breath air compared to their form from the first half of the campaign and have shown tremendous improvement. A testament to their renewed spirit are the results they have mustered playing with 10 men on several occasions, most recently a 1-1 draw against Kerala Blasters.

Sergio Lobera was careful to point out that tomorrow’s meeting against SC East Bengal will be nothing like their last but the Spaniard was wary of the fact that his side need to right a few wrongs from this past weekend and return to winning ways.

Sergio Lobera has confirmed that influential midfielder Hugo Boumous along with the entire squad is fit and available for selection.

Ajay Chhetri will not feature for Robbie Fowler’s SC East Bengal after picking up a red card. Raju Gaikwad, the former Islander who suffered a calf injury, is expected to return to the fold.

Mumbai City FC head coach Sergio Lobera said, “SC East Bengal are now a completely different team from the last time we played them. They have improved a lot, it’s difficult to find spaces in their half and it’s tough to defend some of their players.”

Youngster Vikram Partap Singh said, “It is a motivating factor for me (scoring against East Bengal twice last season), which makes me believe that if I get a chance tomorrow, I can do it.”

The game will kick off at 7.30pm IST and will be broadcast on the Star Sports Network, Disney+ Hotstar, and Jio TV for all viewers in India.

As XtraTime reports, SC East Bengal’s German midfielder Matti Steinmann was one of the new …