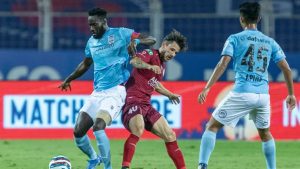 Mumbai City FC were held to a frustrating 1-1 draw against Northeast United FC at the Fatorda on Tuesday. An Ahmed Jahouh penalty and a Mohammed Irshad strike saw a 10-men Mumbai City share the spoils with the Highlanders.

After 15 days since their last game, the Islanders took the field once again, but with wholesale changes in the squad. Mohammad Nawaz, Amey Ranawade, Vikram Partap, and Ahmed Jahouh made it to the XI this time, replacing Phurba Lachenpa, Mohamed Rakip, Vinit Rai, and Ygor Catatau.

Mumbai City FC started the game strongly, getting a couple of shots off within the first minute. Cassio Gabriel, Vikram Partap, and Brad Inman combined well to give us some consolidated chances. This, combined with Ahmed Jahouh’s set piece deliveries meant that Northeast United had to defend resiliently.

Mumbai City FC’s first chance came in the 12th minute. The ball was knocked around in the backline, until Mehtab Singh chose to ping a long ball behind the Northeast defense. Vikram Partap did well to get his head to it, but it sailed wide of the goalpost.

The youngster tried to find the target yet again with his head, this time courtesy a Jahouh free-kick. The ball was off-target, but was much closer on this occasion.

Mourtada Fall also got on to one of the Moroccan’s looping balls, and tried to power a header past the ‘keeper from a narrow angle. However, Subhasish Roy Chowdhury did well to save it, his first of many for the night.

The Highlanders grew into the game belatedly, with their first shot coming in the 22nd minute. Marco Sahanek cut in from the left, and made half a yard of space for himself. He unleashed a left footed effort, which Nawaz punched away comfortably.

All Mumbai City FC attacks came to fruition soon after this, as they were awarded a penalty. A through ball from Cassio saw Vikram run on to it and eventually go down in the box after a challenge. The referee adjudged it to be a penalty, and up stepped Mumbai City FC’s #10. His shot was cool and concise, and rifled straight into the top corner past Subhasish Roy Chowdhury.

The celebrations were immediately succeeded by a water break, which served well to rejuvenate the team. Right after the refreshments, Cassio Gabriel went on a mazy run down the left flank and eventually found himself in the box. He tested the keeper with a strong shot, which was pushed away for a corner.

Right before the half ended, we spurned a golden opportunity yet again. Amey Ranawade’s tackle was picked up by Cassio and gave way to a quick counter. It was him and Brad Inman against two NorthEast United defenders. The Brazilian bid his time well, and set up the Aussie against the goalkeeper. Only the finish was remaining, but unfortunately, it did not come.

Yellow cards were shown to Amey Ranawade and Marcelinho after this sequence of play, due to an argument in front of the referee.

Khalid Jamil’s half-time team talk had done the Highlanders a world of good, as they came out a different side in the second 45. Their first attempt of this half, came in the 48th minute through a corner. VP Suhair flicked on Marcelinho’s delivery and Gurjinder tried to turn it goal-bound from the six yard box. His effort though, went over the bar.

Controversy wasn’t too far away either, when Vikram Partap went down yet again in the box. This time, it was Imran Khan who stepped on his foot despite being beaten for pace. The referee however, signaled to play on and it led to a NorthEast United attack. Marcelinho tried to break, but our captain was up to the mark and diverted his efforts to a corner.

In the 55th minute, NorthEast United came close to scoring once again. Some wing play between Marcelinho and Sahanek saw the ball make its way to the edge of our box. Suhair, with an outrageous effort to scoop the ball had everyone stumped. However, the shot hit the post and fell to Imran who was offside.

The visitors hit the goalframe once again after a couple minutes, this time through Marcelinho. The Highlanders won the ball deep in their half and tried to go long. A wicked deflection from Apuia saw Marcelinho get on to the ball, past Fall. Amey Ranawade was quick to close him down but the Brazilian managed to get a shot off. The ball rattled the upright and kept our clean sheet in-tact.

NorthEast United came knocking once again, this time through a free-kick. Hernan tried to curl one into the right corner, but Nawaz was agile enough to deny him the pleasure.

Mumbai City FC’s first substitution of the game came in the 66th minute. Raynier Fernandes was sent in for Vikram Partap, who was booked only three minutes ago for a late challenge on Marcelinho.

Within the next 10 minutes, Laldanmawia and Flottmann came in for Sahanek and Mashoor. Sehnaj went off for Mohammed Irshad and Pranjal Bhumij was brought in for Brad Inman.

NorthEast United drew parity right before the 80 minute mark, through a corner. The first delivery was cleared out, but the second ball was won by the opposition at the edge of the box. Hernan flicked the ball quickly to Irshad, finding him in space. A quick, grounded strike saw the ball nestle itself into the side-netting.

Desperate to get the three points, the Islanders gave it their all in the forthcoming minutes. Bipin Singh came close to scoring right after the equalizer, but his attempt was diverted by their custodian.

Cassio also was very close to making it 2-1, but Subhasish’s heroic save ensured that the score remains level. It was Amey’s pin-point cross which found Mumbai City FC’s #7 in the box, who tried to poke it in. However, the keeper swung out an arm just in time and kept his team in the game.

Pranjal also came close to scoring, when he latched on to a loose ball opportunistically. Although, his side-footed attempt was too close to the goalie and was saved.

The game grew in temperament, as either side wanted more from the fixture. It was exactly this, which led to a sending off in the dying minutes of the match. Hernan was looking to break on the counter, but was stopped by Amey’s stray arm. The referee was quick to show the second yellow, thus sending off the right-back.

The result sees Mumbai City FC make their way back into the top 4, with 18 points. Mumbai City FC’s next game comes in nine days later, against ATK Mohun Bagan FC on February 3 at the Fatorda.