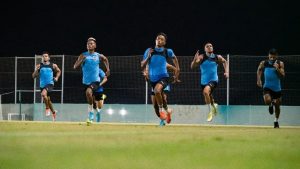 After creating history in their debut AFC Champions League campaign earlier this year, Mumbai City FC are set to start their 2022-23 season with the Club’s maiden appearance at the prestigious Durand Cup. The Islanders will take on the Indian Navy FT in their opening game of Group B on Thursday, August 18 at the Saltlake Stadium in Kolkata with action kicking off at 3pm IST.

In preparation for the new domestic season, the Islanders held a three-week pre-season camp in Dubai from July 25 to August 12.

Des Buckingham and the Mumbai City FC contingent, who arrived in Kolkata on Friday night, have been slotted in Group B of the 131st edition of the Durand Cup. They will square off against the Indian Navy, ATK Mohun Bagan, Rajasthan United and East Bengal in the competition’s group stage.

Their opponents of the first match – Indian Navy. The services side, who have been competing regularly in the Durand Cup in their history, will pose a stern challenge to Des Buckingham’s unit in the Islanders’ 2022/23 season opener.

Mumbai City FC head coach Des Buckingham said, “For me as a coach, for us as a playing group and as a club, we want to continue where we left off in the AFC Champions League last season, which is continuing to build our brand of football, continuing to give players opportunities to showcase what they can do, whether it’s on the Asian stage or here at the Durand Cup or whether it’s in preparation for the ISL. So for me, of course, it’s going to be our first competitive game against the Indian Navy, but it’s very much important that we try and pick up where we left off at the back end of last season.”

Mumbai City FC defender Rahul Bheke said, “We had a great AFC Champions League campaign in Saudi and now as a senior player, I look forward to continuing to guide the juniors and having a great 2022-23 season. We have a good set of players where there is a mixture of juniors as well as seniors. So, as a senior, it’s always my duty to keep helping them on and off the pitch and that’s what I will keep doing and help the team in the upcoming season. I am excited about playing the Durand Cup again, and our team will be playing this prestigious tournament for the first time and our aim is to win and get ready for the ISL.”

The game will kick off at 3pm IST and will be broadcasted on the Sports18 1 & Sports18 1 HD and can be streamed online on Voot and JioTV.