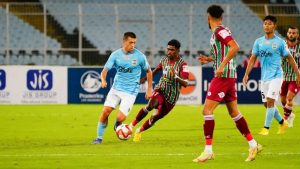 In a brilliant battle of equals, Mumbai City FC shared points with ATK Mohun Bagan in a thrilling 1-1 draw in their second match of Group B at the 131st Durand Cup. While Liston Colaco gave the Mariners the lead, it was Jorge Pereyra Díaz, who scored the equaliser for the Islanders in what was a highly competitive tie between the two Indian Super League (ISL) heavyweights on Wednesday evening in Kolkata.

The Islanders and ATK Mohun Bagan started the game aggressively as they both were immediately looking to exploit space and attack the opposition’s goal to test their respective keepers out. However, in the 2nd minute of the game, Liston Colacao hit the woodwork with a fantastic strike that came off the far post. The Islanders were put on the back foot early on in the game.

The first chance for Mumbai City FC came in the 16th minute when Rahul Bheke was left unmarked inside the box as his header went just over the crossbar from a beautifully measured corner kick.

But that was the only clear-cut chance Mumbai City FC could create in the opening minutes as they were looking to organise their defence to deal with the pressure that the ATK players put them under in the first 25 minutes of the game.

Just before the half hour mark, the influential Alberto Noguera, Greg Stewart and Bipin, being supported well by the relentless energy of Vikram Partap Singh started getting on the ball more and more as their influence on the game was growing. Seemingly the Islanders had finally found their groove and in the 31st minute, Noguera found Bipin with a sensational through ball. Bipin managed to cut inside but shot it just wide of the far post.

Despite Mumbai City FC’s constant pressure, ATK Mohun Bagan took the lead in the 40th minute through Liston Colaco. After a fine run by Asish Rai from the right saw Liston get on the end of a loose ball after Phurba Lachenpa’s save fell straight into the feet of the ATKMB forward. ATK Mohun Bagan led the game 1-0, as the Islanders looked to provide a quick and effective response and in the 44th minute Bipin was left unmarked inside the box again as Stewart delivered a great ball, but Bipin’s header was well saved by Vishal Kaith in the ATK Mohun Bagan goal.

Both teams put on excellent attacking displays in the first half, but Liston’s strike ensured that ATK Mohun Bagan went into the second half with a slender 1-0 lead over Mumbai City FC.

ATK Mohun Bagan and Mumbai City FC looked to start the second half in a similar fashion but struggled to do so. For the first 20 minutes of the second half, both ISL sides looked sluggish.

The first clear-cut chance of the second half came in the 65th minute as ATK Mohun Bagan almost got their second goal. Manvir Singh delivered a terrific ball from the left as Phurba fumbled the ball into the path of Liston Colaco who failed to score and double his side’s lead.

The Islanders’ efforts finally paid off in the 77th minute as Stalin’s sumptuous cross from the right found substitute Jorge Pereyra Diaz at the right spot, who headed the ball at the far post to find the back of the net with precision, levelling the game 1-1.

The game was headed towards a nervy last 10 minutes as both sides looked to clinch a decisive goal in the dying embers of the game. The last clear-cut chance of the game fell to Liston in the 80th as he triggered a powerful shot from distance which went off target.

A pulsating match ended in a stalemate as the points were shared between Mumbai City FC and ATK Mohun Bagan, meaning Mumbai City FC temporarily sit at the top of Group B.

The Islanders will take on Rajasthan United FC in the third group match at the 131st Durand Cup on August 29 at the Kishore Bharati Krirangan.