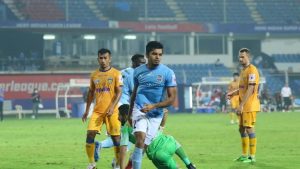 Mumbai City FC eked out a 1-0 win against Chennaiyin FC at the Fatorda on Wednesday courtesy of a 86th-minute header from Rahul Bheke. This was the Islanders’ fourth win on the trot, and Chennaiyin FC’s first loss of this ISL season.

Des Buckingham made no changes to his starting XI, and neither did Chennaiyin FC’s head coach Bozidar Bandovic.

Unlike most of the previous Mumbai City FC games, this one was a gritty battle which yielded little to either side. The first few minutes saw the Islanders play at a high tempo, which was nearly rewarded with a goal in the 8th minute. An unorthodox Amey Ranawade cross prompted Vishal Kaith to step out and intercept the ball. However, his attempt was mistimed and Igor Angulo nearly headed the ball into an empty net, only to be denied by the post.

Angulo’s frustration was shared by the rest of the team, as the remaining half went on in a similar fashion. It was us knocking repeatedly on Chennaiyin’s padlocked door, but to no avail.

In the 21st minute, Angulo latched on to a hopeful ball yet again, but this too evaded the goal. Cassio’s flick that found the Spaniard in space, however the chance went begging as he volleyed it wide of the goalframe.

The first 45 also saw yellow cards being handed out to Lallianzuala Chhangte and Anirudh Thapa of Chennaiyin FC. The first was for a nasty tackle from behind on Apuia, whereas the latter was for clattering into Cassio Gabriel while getting none of the ball.

With 73% possession, and eight shots, Mumbai City FC ended the first half goalless. Chennaiyin FC on the other hand, only managed to take one shot, which was blocked. The game was an extrapolation of an attack versus defense drill, where neither side was able to get the upper hand.

The second half started at an alarming speed, with Chennaiyin FC nearly grabbing the lead. A turnover by Chhangte nearly led to Lukasz Gikiewicz scoring if it wasn’t for keeper Mohamed Nawaz’s heroics. The striker fumbled and took a few touches too many, while the ‘keeper saw the opportunity to rush out. What followed was a corner which was easily dealt with by the defence.

In the 67th minute, both sides made their first changes. Germanpreet Singh came on for Edwin Sydney, meanwhile Angulo and Raynier went off for Ygor Catatau and Vikram Partap Singh.

The changes seemed to bring a dose of energy, as we got close to scoring just a couple minutes after. Amey found Ygor in the right halfspace, who laid the ball off to an onrushing Vikram. The young winger squared it to Cassio, and he tested the Chennaiyin FC custodian. The ball was parried into Apuia’s path, but was saved yet again with a last-minute reflex and a header off the goalline.

Chennaiyin FC made two more switches after this, opting to bring Mirlan Murzaev and Rahim Ali in for Chhangte and Gikiewicz. Meanwhile, Gurkirat Singh made his fourth appearance for the Islanders as he replaced Bipin Singh.

The game seemed to be heading towards a draw, but yet again it was Jahouh who showed his quality. In the 86th minute, the number 10 stood over a deep free-kick earned by Vikram. He provided a sumptuous delivery to Rahul Bheke and the Mumbai-born defender made no mistake. The ball was headed past Kaith expertly to give Mumbai City FC the lead.

Chennaiyin FC tried to draw parity in the remaining minutes, but to no avail. We held on to our lead, and earned our second clean sheet of the season in the process.

With this result, Mumbai City FC strengthen the lead on top of the table with a four point gap. Up next are Kerala Blasters, in a home game at the Fatorda on Sunday, December 19.