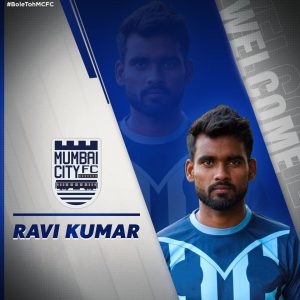 He made his senior debut for the AIFF Developmental side Pailan Arrows (Indian Arrows) in the 2011/12 season, where he spend two seasons. Ravi Kumar then left for Sporting Clube de Goa, where he spend four mostly successful seasons with loan spells at Delhi Dynamos in 2015 for ISL-2 and Minerva Punjab FC for the 2017 I-League. In the 2017 ISL draft, Ravi Kumar was picked and signed by NorthEast United FC.

With Mumbai City FC having earlier extended the contract with India international goalkeeper Amrinder Singh, Ravi Kumar has been signed as understudy to Amrinder.

@Arunfoot
Previous India U-16 coach Bibiano Fernandes: Better to go all out for a win in practice matches!
Next Two-Day Indian Football Coaches Convention concludes in Navi Mumbai!