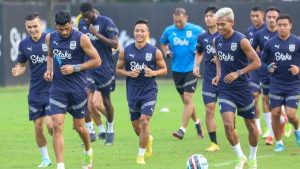 ATK Mohun Bagan will welcome Mumbai City FC for a highly anticipated clash in the Indian Super League this Saturday as Des Buckingham’s side travel to Kolkata with action kicking off at 7:30pm IST.

The Islanders remain unbeaten in the 2022/23 ISL season after the 13 games they have played, winning 10 and drawing the remaining three. In their most recent fixture, the Islanders recorded a stunning 4-0 win over Kerala Blasters FC at the Mumbai Football Arena, thanks to a first-half blitz by the Islanders that saw them score four goals in the first 30 minutes of the game.

ATK Mohun Bagan currently sit fourth on the ISL table, 10 points adrift of the Islanders with a game in hand. The Mariners have won seven, lost three and drawn two games this season. The Mariners managed to edge past FC Goa in a grueling game that ended 2-1 in favour of ATK Mohun Bagan before going on a 17-day break ahead of tomorrow’ game.

Head coach Des Buckingham in the pre-match press conference before the game against ATK Mohun Bagan talked about what stands out according to him about his team, “I’m happy with how we started the season and I’m happy with how we have played, more so than the results up until now. I keep speaking about how we have to get better game by game and as long as we keep trying to do that, I’ll be very happy going into this game because we’ve done as much as we can to prepare ourselves what we know will be another, very tough and challenging test against ATK Mohun Bagan. But it’s what we’re ready for and one we’re looking forward to.”

He went on to talk about his contract extension with the Islanders, “The club wants to be the best that it can be without comparing itself to others and the group wants to be as successful as we can, not just in one season but try and build and put something in place, put some real solid foundations to try and be as successful as we can over a longer period of time. So all of those factors for me made sense to firstly sign and stay here and then the excitement of spending another two years working with people like Vikram and trying to help this club build and develop on what we’ve already done.”

Coach Buckingham was accompanied by Vikram Partap Singh who spoke about the incredible run the Islanders are on, “I think the main reason is the idea he (Des Buckingham) has brought into the team. Now we have been together for the last 16 months. So everyone knows how we want to play and the style we want to play. This is one of the main reasons for this run and hopefully, we will carry on this run with a good result against ATK Mohun Bagan.”

Vikram went on to talk about how the Islanders’ squad is handling the pressure of being on top of the table, as he said, “Everyone is enjoying the pressure because we know what we can do. We can still improve in a lot of things and I think what we are doing right now is always looking to do our best and that’s the best thing for us, the players and the club.”

Buckingham ended the press conference by talking about how he sees the remainder of the season playing out, as he said, “Every team I think has got better and stronger and you get that because of games and time that you spent together. I certainly include ATK Mohun Bagan in that, and also will include ourselves in that. The more time we get to spend together as a team, the more time we get to train, and more importantly play together, the more we can try and progress and get better and I see that not just with us, but I see it across the league and I think what it makes for is some wonderful matches till the end of the season. We’re certainly seeing that now, and it will be a very exciting last seven games for us and seven games, or six games for others, as the season comes to an end.”

Jorge Pereyra Díaz will miss out on the action against ATK Mohun Bagan after picking up his fourth yellow card of the season against Kerala Blasters.

The Mariners’ new signings Federico Gallego, Slavko Damjanovic and Puitea are all available. Deepak Tangri has been ruled out for the rest of the season, while Manvir Singh continues to recover.