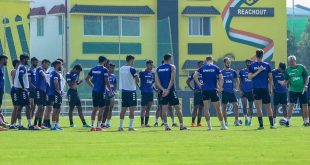 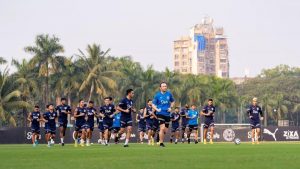 Mumbai City FC are all set to take on NorthEast United FC in their upcoming fixture of the 2022/23 Indian Super League season. The Islanders will travel to Guwahati to take on the Highlanders away from home at the Indira Gandhi Athletic Stadium on November 25 at 7:30pm IST.

After matchweek 7, the Islanders are now the only remaining unbeaten side in the 2022/23 Indian Super League. The Islanders drew 3-3 against Hyderabad FC in their opening game. They then went on to register a deserved 2-0 win against Odisha FC, which was followed up by a 1-1 draw against Jamshedpur FC at home. Des Buckingham’s side kept the run going with a 2-0 win against Kerala Blasters FC in an away game, which was followed by an action-packed 2-2 draw against ATK Mohun Bagan at home. Their most recent games against Chennaiyin FC and Bengaluru FC saw them register stellar victories. They won 6-2 against Chennaiyin FC away from home and followed it up with a phenomenal attacking display at home against Bengaluru FC in a game that the Islanders won 4-0.

NorthEast United FC, on the other hand, have been having a tough time in the ISL this season. The Highlanders currently sit at the foot of the league table after losing all six of their games so far in the season. They lost their first game 1-0 against Bengaluru FC, which was followed by a 3-0 defeat at the hands of Hyderabad FC. They lost their following games to East Bengal, Jamshedpur FC and Kerala Blaster FC which ended 3-1, 1-0 and 3-0 respectively. In their most recent game, they lost 2-1 to ATK Mohun Bagan away from home.

Coach Des Buckingham in the pre-match press conference talked about the team’s performance so far in the season and how they are preparing for the game against NorthEast United, “We have watched all the NorthEast United games, especially the most recent ones, and even though they haven’t yet registered a point, the performances that they’ve put in have been good. I think the scorelines have been very close and very tight and it could have gone the other way in the majority of those games.”

Coach Buckingham was accompanied by goalkeeper Phurba Lachenpa who spoke about the spirit in the camp ahead of the game against the Highlanders, “We have been playing very well. We have a very good playing group and a very good bench as well. The starting role doesn’t come only for the 18 because we are here in one of the best clubs in India so we have very strong competition within our ranks. Everyone is pushing each other and that’s why we can see the result on the field. As a team, we are enjoying our football, and the bonding we have in the dressing room is showing on the pitch as well because everyone is enjoying their football as I am.”

Buckingham signed off by saying, “Every game is an opportunity for us to continue getting better. Now in round eight after seven good rounds, we know it’s not going to be any easier or more difficult than the other ones. But if we don’t pay the attention that it should be paid and the respect that it should be paid the same way we have for the previous seven games, it’s going to be a very difficult evening for us. We’ve done as much as we can. The main message to our group has been to continue getting better round by round and that’s still the same coming into this game and that won’t change as we go through the season.”