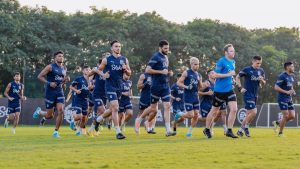 Mumbai City FC are set to take on NorthEast United FC in their upcoming clash in the 2022/23 Indian Super League season. Following their 1-0, away victory against ATK Mohun Bagan, Mumbai City are the first team to secure qualification to the playoffs. Mumbai City will look to continue their undefeated campaign and assert themselves against the Highlanders, who are currently at the bottom of the table. The Islanders will host NorthEastUnited FC at the Mumbai Football Arena on the 19th of January 2023 at 7:30pm.

The Islanders currently lead the league table with 36 points in 14 games. They have secured nine consecutive victories and also lead the league with the most goals (41) and the highest goal difference (28). Mumbai are in blistering form, having triumphed over the Kerala Blasters 4-0, at home. Last week, they defeated ATK Mohun Bagan 1-0, with a crucial first-half goal from Chhangte that sealed their entry into the playoffs.

NorthEast United FC have secured only four points in 14 games. They dropped points at home against Bengaluru FC, losing 1-2. In their most recent encounter, they shared points with FC Goa following a 2-2 deadlock at full-time. NorthEast United FC will be keen to walk away with points for the third time this season.

Des Buckingham in the Pre-match press conference spoke about how his team improved defensively, as he said, “I think we’ve conceded 13 goals in 14 games now, so across the 14 games it’s pleasing to see there’s been an improvement in defence. But again, when I look at the back line, the only difference in that back line from what we had last year has been the addition of Rostyn Griffiths. Even when Rostyn hasn’t been there, that defensive stability has still been there.”

He went on to add, “So when I look back, I think again it comes back to the time that they’ve been able to spend together and then the consistency of being able to feel the very similar backline, which obviously includes the goalkeeper. Because those relationships are very important and the understanding of what each other does and how to do it and when to do it have played a big part.”

The in-form Bipin Singh accompanied Buckingham for the conference, and he spoke about how the coach has helped improve the understanding between the attackers, as he said, “We are always working hard with Coach on the training ground. Me, Chhangte, Jorge, and Greg are always looking to work together on the training ground to better understand each other’s games and that has helped us to perform together on the pitch.”

The record goal-scorer for the Islanders added, “We can improve further and we are looking to do it constantly. We all believe that under the coach’s guidance, our performances can improve further because we still do make small mistakes but we are constantly working on them to improve our attacking output as a unit.”

Coach Buckingham concluded the press conference by talking about the resilient attitude of the squad as he said, “I see them every day and the promising thing always is, whether it’s Chhangte or it’s Bipin, they showcase the ability and character to keep trying and keep getting on the ball and be brave to keep getting and trying different things because if they can do that, we’ve seen the outcome and sometimes it may take the first shot which happened against Kerala or it may take the third or fourth, it’s the mindset of the team that pleasing for me to see. What the players can do, again and again, is going to be so important. It’s very good to see from the sideline when you have players that showcase confidence or courage, to see players being able to express themselves and show what they can do what they can and know they’re supported to do that, that’s very exciting to see.”

Jorge Pereyra Diaz is back after serving a one-match suspension, and Apuia Ralte is available for selection for the Islanders.