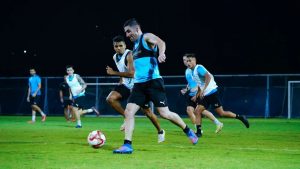 Mumbai City FC will look to consolidate their place on the top of Group B when they take on I League side Rajasthan United FC in the third tie of Durand Cup 2022 on Monday, August 29 at the Kishore Bharati Stadium in Kolkata with the action kicking off at 3pm IST.

After kickstarting their Durand Cup campaign with a comprehensive win, the Islanders played out a thrilling 1-1 draw against the local favourites ATK Mohun Bagan in their previous outing. The Islanders are currently leading Group B with four points and a win against Rajasthan United will strengthen Des Buckingham’s side’s chances of progressing into the knockout stages of Asia’s oldest football competition.

Rajasthan United, on the other hand, are at the top end of Group B with 4 points in two matches but are placed second in the table by virtue of goal difference. They began their campaign with a remarkable win 3–2 win against ATK Mohun Bagan and played out a goalless draw against East Bengal.

Mumbai City FC head coach Des Buckingham said, “It was a tough game against ATK Mohun Bagan, but we still took a crucial point out of it. Overall, we’ve got a decent start here in the Durand Cup. We haven’t played against Rajasthan United before. They have done pretty well in the tournament so far, having earned points against both the hosts ATK Mohun Bagan and East Bengal, so it will be a challenging game, but we are prepared for it.”

“We want to continue to build on our football and improve in the way we want to play and put ourselves in a strong position to qualify for the knockout stages of the competition.”

The game will kick off at 3pm IST and will be broadcasted on Sports18 1 & Sports18 1 HD and can be streamed online on Voot and JioTV.