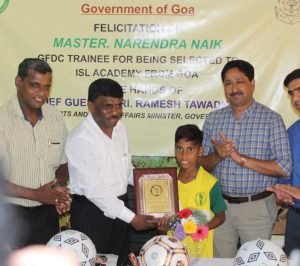 Narendra Naik, a resident of Sangolda and a regular, dedicated and hardworking Under-12 Goa Football Development Council trainee from the GFDC-Aldona grassroot football development centre has gradually emerged to be the Rising Star for the future.

He has played and used the Vodafone – GFDC Rising stars Football Festival platform to showcase his skills and ability which has earned him a place in the ISL Academy. Narendra who idolises Lionel Messi plays as a striker/attacking midfielder and has been instrumental with the Aldona team that were the winners of the 3rd edition of Vodafone – GFDC Rising stars Football Festival by scoring 11 goals in the Under-13 boys category.

The Reliance Foundation Young Champs selections were conducted in Goa through FC Goa at Navelim grounds, Rosary School in Goa wherein the Goa Football Development Council sent its grassroots trainees. The youngsters were put through their paces by Piet Hubers, technical director of the Grassroots Development Programme for the Indian Super League and other local coaches. 18 boys were shortlisted to travel to Mumbai for further selections among other boys from other ISL franchises. Narendra Naik was the lone Goan to be selected into the ISL Academy.

Addressing the gathering Dr. Rufino Monteiro congratulated Narendra Naik and wished him well in his future prospects. He praised the GFDC coaches Paxiao Gomes, Sundar Raut and Pradeep Chopdekar along with Blaize D’Cruz whose efforts and hard work has made Narendra dream possible.

Speaking on the occasion, Ramesh Tawadkar expressed his pleasure to see the talented boy develop through the Goa Football Development Council which was constituted by the Government for young children in Goa and the organisation has started bearing fruit with Narendra Naik being the first and lone Goan boy to be representing at the ISL Academy.