Newly designed FIFA Fan Festival with a big premiere at the 2022 FIFA World Cup in Qatar! 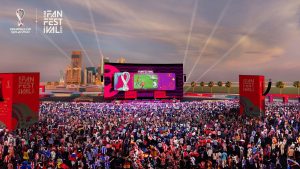 FIFA has under the title FIFA Fan Festival a new concept for the FIFA World Cup and the FIFA Women’s World Cup presents, which provides completely new entertainment for the fans on site. Premiering at the 2022 FIFA World Cup – Qatar, this multi-dimensional, inclusive event will offer fans new opportunities to live out their passion for football and share the best of music, entertainment, culture, food, gaming and lifestyle in a true festival atmosphere combine.

This new gathering place has been a huge hit as the FIFA Fan Fest at four FIFA World Cups, starting with the finals in Germany in 2006, and has so far attracted nearly 40 million visitors across five continents. Following a modified version this year in Qatar, the FIFA Fan Festival™ 2023 in Australia and Aotearoa, New Zealand will also make its debut at the FIFA Women’s World Cup.

“In keeping with our vision of a truly global, accessible and inclusive football, we are delighted to launch a new World Cup entertainment concept,” said FIFA President Gianni Infantino. “The FIFA Fan Festival offers fans a unique opportunity to get together beyond the stadium and experience football in a whole new way. We can’t wait for the FIFA Fan Festival™ to kick off with even more entertainment bringing the men’s and women’s World Cups and global football culture even closer to fans and partners.”

Launch of the redesigned FIFA Fan Festival 2022 in Qatar

The FIFA Fan Festival has been redesigned to better reflect the unique electrifying atmosphere of major FIFA competitions. Whether you are a die-hard or occasional football fan, or a lover of music, good food and culture, everyone can experience football in a new way in a relaxed, fun and festive atmosphere. FIFA is presenting the newly designed FIFA Fan Festival in close cooperation with the host country for the first time at the 2022 FIFA World Cup – Qatar.

“The 2022 World Cup FIFA Fan Festival at al-Bidda Park has something for everyone. Against the stunning backdrop of the West Bay skyline, fans can enjoy live matches, various musical and cultural performances, and a wide range of food and beverage options,” said HE Hassan Al Thawadi, Managing Director of FIFA World Cup Qatar 2022 LLC. “It is at the heart of our FIFA World Cup – the first in the Middle East and the Arab world. When fans head to Qatar in November, they expect a warm welcome, spectacular football and plenty of entertainment. We can’t wait to welcome the fans in just over 70 days.”

Fans around the world tuned in to the digital platform FIFA+ the opportunity to experience the FIFA Fan Festival up close, immerse yourself in the atmosphere and interact with each other. They can also access FIFA Fan Festival content beyond the 2022 World Cup by visiting the FIFA World Cup page on FIFA+.

At the 2023 FIFA Women’s World Cup – Australia & New Zealand, the FIFA Fan Festival will be held in all nine host cities in Australia (Adelaide/Tarntanya, Brisbane/Meaanjin, Melbourne/Naarm, Perth/Boorloo and Sydney/Gadigal) and Aotearoa/New Zealand (Auckland /Tāmaki Makaurau, Dunedin/Ōtepoti, Hamilton/Kirikiriroa and Wellington/Te Whanganui-a-Tara). In order to offer visitors the best possible experience on site, the event will be tailored to the local weather conditions as well as the respective match days and kick-off times at each location.

To ensure fans around the world can experience the FIFA World Cup and FIFA Fan Festival, FIFA offers a unique commercial licensing model that allows new and existing stakeholders to host satellite festivals in major cities around the world.

Information on the licensing partners and international festivals planned for the 2022 FIFA World Cup – Qatar, 2023 FIFA Women’s World Cup – Australia & New Zealand and beyond will be announced in the coming weeks.

The final draw for the TotalEnergies African Nations Championship, Algeria 2022 will take place in …