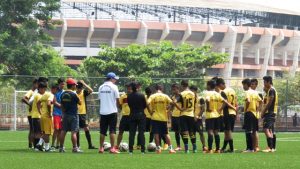 Royal Wahingdoh FC are all set to take on the might of Minerva Academy FC in the grand finale of the maiden edition of the Nike Premier Cup for the Under-15 Youth League. These two are the last teams standing in the competition and will clash their horns for the title at the Duler Stadium, Mapusa on Friday.

According to Royal Wahingdoh coach Bobby Nongbet, Minerva Academy FC are the best team in the competition this year. The coach suggested that they are a formidable outfit although his side had drawn 2-2 in the opening game of the final round.

“We have taken it one match at a time and it has come to this. Minerva Academy FC are tough opponents because they are a strong team physically and when it comes to eleven versus eleven, they are a very good team,” Nongbet explained about the task at hand.

The Northeastern side were the first side to qualify for the final after they outplayed the Kolkata-based side United SC with a 3-0 victory.

It was a comprehensive win with Wahingdoh captain Rheadolf Nelson Daloi leading from the front. The skipper scored the first goal and also won the penalty from which Wahingdoh scored again on course to victory.

“We are a good team and always give our best. We learn lessons from every match and we have the experience which can give us the victory,” Rheadolf said.

Meanwhile, The Chandigarh outfit will also be turning to their captain Manveer Singh who has been one of their most consistent performers throughout the tournament.

“We are ready for a fight tomorrow. The team combination is working well for us and we are confident that we have what it takes to win the Cup,” Manveer suggested.

Minerva qualified for the final after overcoming a dogged Mohammedan Sporting Club who frustrated Minerva in the first half by shutting out their attackers.

The game turned on its head after Mohammedan Sporting defender Debraj Rakshit got sent off early in the second half and Minerva eventually scored two goals.

“We have a lot of endurance training and we know that this side can overcome any team. We have already played a match against Wahingdoh but we will definitely aim at winning the final and this team is very confident,” a confident Minerva coach Surinder Singh said.

After the semifinal, Mohammedan Sporting coach Murari Kar was all praise for the Chandigarh side saying that having 6-foot tall players play in a U-15 league is great for the future of Indian football.

The final will be a contest between a physically formidable outfit against a technically proficient team as the teams fight it out to become the best Under-15 side in the country, the champions of the Nike Premier Cup 2016.