No room for complacency as champions Bengaluru FC look to end I-League on a high!

Arunava Chaudhuri 2016-04-22 I-League Comments Off on No room for complacency as champions Bengaluru FC look to end I-League on a high! 1,255 Views 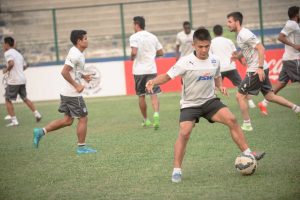 Ashley Westwood said there will be no complacency when newly crowned I-League champions Bengaluru FC take on Mohun Bagan in a game of no consequence at the Kanchenjunga Stadium, in Siliguri, on Saturday.

Involved in a tense title-chase that involved Bagan, the Blues shut the door on the Kolkata team when they beat Salgaocar 2-0 last Sunday to move to an unassailable five-point lead and clinch their second League title in three years, at the Kanteerava Stadium, in Bengaluru.

“It’s a football match and there will be no complacency whatsoever. Anybody who knows me knows I like to win – whether it’s training, cards or a football game,” said Westwood while addressing the press after his boys put in a session at the match venue, on Friday.

However, with a key AFC Cup game looming large on Wednesday, it will be interesting to see the team Westwood chooses to roll out on an evening when his team will be handed the trophy. Bengaluru host Lao Toyota from Laos at the Kanteerava knowing a win will take them closer to getting out of the group stages. “Obviously, we have a big game on Wednesday in the AFC Cup. But like we have done all season, we will try and put the best team out and look to get a result,” said Westwood.

Prompted whether he would be tempted to pick a young squad, Westwood said youngsters were always part of his plans through the season. “We’ve let youngsters perform all season. We had two under-22s in what turned out to be the season decider against Salgaocar. Regardless of age, I pick the best team suited for the occasion. I never think of age or experience. We will not be giving people a game for the sake of it, tomorrow. We’re giving them a game to win tomorrow and on Wednesday.”

Much has been spoken about the pitch at the Kanchenjunga but Westwood said he didn’t want to make too much of it. “The pitch is a little hard but it’s the same for both teams. It’s the pitch that’s been selected for the game and it’s one we will play on.”

Earlier in the day, Bengaluru arrived at the Bagdogra airport to a raucous welcome by local fans who turned up in big numbers to get a glimpse of the champions. Every member of the squad and staff was honoured with a traditional scarf while dancers and a school band marched the team to the bus.