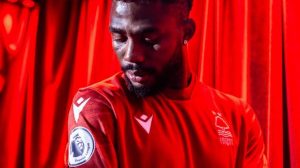 Prior to arriving in England, Dennis’ first professional venture was in Ukraine’s top-flight with Zorya Luhansk before enjoying a productive four-year spell in Belgium with Club Brugge, notably scoring twice in a 2-2 draw at the Santiago Bernabeu against Real Madrid in the group stages of the 2019/20 UEFA Champions League.

Thereafter he played for 1.FC Köln in the Bundesliga before moving to FC Watford.

With seven international caps to date for Nigeria, the pacey forward links up with fellow countryman Taiwo Awoniyi to bolster The Reds’ attacking options.