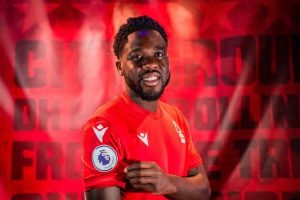 The 24-year-old pens a long-term contract at The City Ground after The Reds agreed an undisclosed fee with Bundesliga side VfB Stuttgart.

Born in Brussels, Mangala began his youth career in Belgium with RSC Anderlecht and after a brief loan spell with Borussia Dortmund’s youth side, he made the permanent switch to Stuttgart in 2017.

The midfielder continued to gain experience in Germany and spent the 2018/19 campaign on loan at Hamburger SV in Bundesliga 2, making 34 appearances in all competitions.

Making 72 Bundesliga appearances in total, Mangala also represented his nation at each youth level and played a key role as Belgium reached the FIFA U-17 World Cup semi-final in 2015.

Orel currently has two senior Belgium caps to his name after making his debut in March 2022 against the Republic of Ireland before featuring again for Roberto Martinez’s side three days later during a 3-0 win against Burkina Faso.

The midfielder becomes The Reds’ twelfth signing of the summer.

@Arunfoot
Previous VIDEO: PUMA launch the all new PUMA ULTRA ULTIMATE boot!
Next India U-20 pump 8 goals past Nepal in SAFF U-20 Championship!