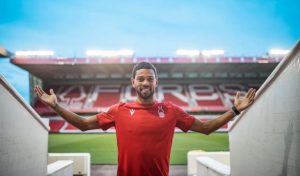 Nottingham Forest have confirmed the signing of Atlético Madrid full-back Renan Lodi on a season-long loan.

The 24-year-old arrives on Trentside having spent three seasons in the Spanish capital, appearing 118 times in total including 23 appearances as Atlético won the LaLiga title in 2020/21.

The Brazil international has represented the Seleção on 15 occasions since making his debut in October 2019 against Senegal.

With 27 UEFA Champions League appearances to his name, Lodi was a key figure for Diego Simeone’s Atlético as they reached the quarterfinal stage twice in the last three campaigns.

Before joining Atlético, Lodi rose through the ranks with Brazilian Série A side Athletico Paranaense and helped them win the Copa Sudamericana and Campeonato Paranaense in 2018.