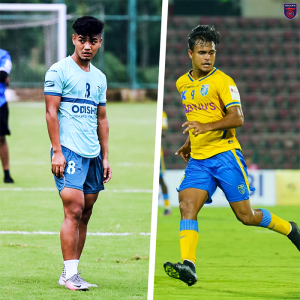 Odisha FC aim to continue strong form in their clash against Kerala Blasters in the Durand Cup.

Odisha FC come off the back of a 6-0 victory against NorthEast United FC in what was their first-ever Durand Cup performance at Indira Gandhi Athletic Stadium in Guwahati last Wednesday. After a strong pre-season together, Head Coach Josep Gombau iterated that the Club wants to use the Durand Cup to build rhythm and style of play while remaining competitive.

The Club’s efforts behind the scenes certainly showed on the pitch, with strong showings from every area of the pitch, especially from those in the attack. “We hope to carry this performance into the next game,” said Man of the Match Jerry Mawihmingthanga, who scored a blistering first-half brace against NorthEast United FC.

Nandhakumar was in red-hot form last time around, scoring a beautiful curler into the top-right corner, while Pedro Martin will hope to get on the scoresheet this time after a positive performance.

Fans will be hoping to see new signing Osama Malik make an appearance, who missed the first game due to visa and fitness issues. “Osama joined the squad late due to visa issues. We want to build his fitness,” said Gombau. “It’s important to be in good shape and not have any injuries. We’re playing in a competition we want to win.”

Gombau will hope to see his players emulate their opening Durand Cup performance in their second match, where they face Kerala Blasters. Kerala Blasters drew their first game against Sudeva Delhi FC and currently sit in fourth place in Group D.

Another win from Odisha FC with a healthy goal difference should see them retain their position at the top of the table.

Odisha FC faces Kerala Blasters at 3pm IST on Tuesday, August 23. You can watch the match on Sports18 1, Sports 18 1HD and Sports18 Khel for Hindi commentary. Live streaming of the Durand Cup 2022 will also be available on VOOT and JioTV.