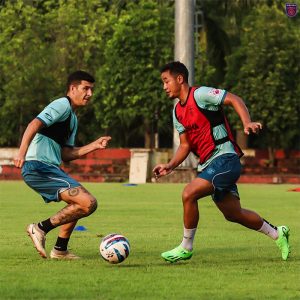 Odisha FC are three from three in their group with wins over NorthEast United FC, Kerala Blasters and Sudeva Delhi FC. They play Army Green later today in their last group stage fixture at Indira Gandhi Athletic Stadium in Guwahati before heading to Kolkata for their quarterfinal clash against Bengaluru FC.

The Juggernauts are in fine form, scoring eleven goals with no reply across all their matches so far. Head Coach Josep Gombau was looking to build his team’s rhythm and fitness, and his side have done just that.

Having already qualified for the quarterfinal, the players will want to maintain their positive start as they aim to go all the way in the tournament. Gombau may look to rest his players, which might give fans the opportunity to see new signing Niraj Kumar in action.

Another win would see Odisha FC finish the group stage with 12 points in Group D.

Odisha FC play Army Green at 6pm IST on Sunday, September 4. You can watch the match on Sports18 1, Sports 18 1HD and Sports18 Khel for Hindi commentary. Live streaming of the Durand Cup 2022 will also be available on VOOT and JioTV.