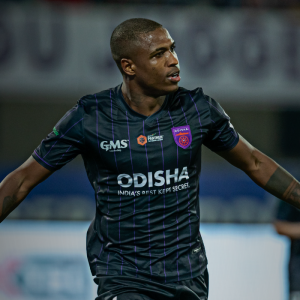 Diego Mauricio’s brace and Nandhakumar’s serendipitous goal help Odisha FC climb to the fifth spot as they yet again complete another comeback with a 3-1 win and do the league double over East Bengal FC.

With four goals in two games, Diego has been in red-hot form for the Juggernauts. In the reverse fixture, the Brazilian provided two assists in Kolkata while scoring two against the Red & Gold Brigade at the Kalinga.

Nandha continued his rich goalscoring form as he netted his fifth of the season at home yesterday.

A commanding performance from Raynier Fernandes in the midfield saw him pick up two assists as the Mumbai boy combined pretty well with Saul Crespo in the middle of the park adding more stability and steel.

Cleiton Silva put the visitors ahead in the 10th minute after he pounced on a lofted ball from Alex Lima and dinked it over the Odisha FC custodian Amrinder Singh. The Juggernauts came very close to an equalizer when Thoiba Singh combined with Diego and found Jerry at the far post with a teasing cross but the winger couldn’t drive the ball into an empty net as he lost his balance.

20 minutes into the game the hosts found their way back into the match through Diego Mauricio, with Raynier whipping in an absolute peach of a cross from the corner that found Diego putting it past the keeper with his right foot.

Nandhakumar found the back of the net in the second half on the back of an intended cross which eventually dipped just behind the East Bengal FC custodian giving the hosts the lead.

Adding to East Bengal FC’s woes Diego scored his second of the night. Raynier found the Brazilian again with a weighted through ball down the right. Mauricio pushed his way through the defense and slipped it past the keeper at the near post putting the game to bed.

Odisha FC is now fifth on the league standings and travels to Bengaluru FC for their next game against the Blues on January 14 at the Kanteerava Stadium.