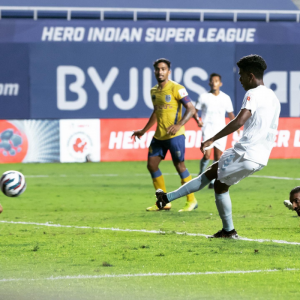 Odisha FC was beaten by Kerala Blasters FC in its third game of the ongoing Indian Super League at the Tilak Maidan in Vasco. However, Indian youngster Nikhil Raj, who is on loan from Kickstart FC, managed to score a goal in the injury time on his ISL debut. Alvaro Vazquez (62′) and Prasanth Karuthadathkuni (85′) were the two goalscorers for the Kerala Blasters.

Kerala Blasters got three chances in the first five minutes of the match but the Odisha FC defence and custodian Kamaljit Singh ensured that none of them gets converted. In the 12th minute, Aridai Cabrera made a good run from the left flank and found Javi Hernandez inside the box but the latter’s shot went over the crossbar.

The Hero of the Month winner was again in action in the 25th minute when he tried a long-ranger from the midfield which also went out. With three minutes remaining in the first half, Hendry Antonay also tried something similar from the right flank and this time, it was parried away by Albino Gomes.

With the deadlock yet to be broken, the Kalinga Warriors brought in Isaac Vanmalsawma in place of Isaka Ralte. The Bhubaneswar-based side were in action straightaway as Aridai showed his skills to enter the box but his shot was wayward. Adrian Luna got a chance to put KBFC on the lead from the right flank which again failed to test the Odisha FC keeper in the 50th minute.

After more than an hour’s wait, the first goal of the evening came from Alvaro Vazquez who avoided a off-side trap and got into a one-on-one situation with Kamaljit. The former managed to slot the ball in quite nicely to put Kerala on lead.

Vazquez almost doubled the lead three minutes later but this time, his shot from was saved nicely by Kamaljit three minutes after the first goal. However, KBFC doubled their lead in the 85th minute when Prasanth got the ball from Luna and drilled it into the back of the net.

Odisha tried coming back into the game and Bengaluru youngster Nikhil Raj, who came in as a substitute for Javi in the 90th minute, scored his first ISL goal on debut. The game ended with a scoreline of 2-1 in favour of the Blasters.

Odisha FC will now take on NorthEast United FC in their next match on Friday, December 10.

Ahead of Mumbai City FC vs Kerala Blasters, the Islanders head coach Des Buckingham and …