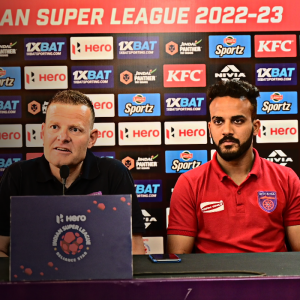 Josep Gombau and Sahil Panwar attended the pre-match press conference and briefed the media ahead of their game tomorrow against Kerala Blasters.

With the match against Kerala Blasters FC coming up, what are your thoughts on that?

Josep Gombau: The match will be very interesting, it’s Christmas so the president, the coach, the family will be almost there and it will be a very special match for everyone, everyone will want their team to win but we will try to go home with three points.

After playing 10 matches in the first half of the season, what are the team’s objectives and plans for the second half?

Josep Gombau: We have played 10 matches in the first half and won six of them. The team is playing well, they are trying to play even better and the training is going on very vigorously. We will try to be at the top of this season’s points table.

Sahil! How is the journey for you in this year’s league?

Sahil Panwar: It’s amazing, now I’m fully fit mentally and physically, so I’m very happy. We have a very good team and are learning a lot playing under the coach (Josep Gombau), so this season is going very well.

What is the game plan against Kerala Blasters FC?

Sahil Panwar: Kerala Blasters have a very good game plan. Kerala is a place where all the players will want to win, its a very good environment, so we will give our full 100 percent there to win.