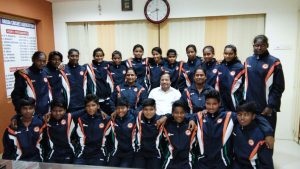 The hosts, the Football Association of Odisha has selected their final squad for the Odisha Junior Women’s Team for the Junior Women’s National Football Championship to be played from today, July 1 until July 20, 2016 with the matches would be played at the Barabati Stadium and Odisha Police ground in Cuttack.

Odisha have named Anima Malik as their captain with Gitanjali Khuntia as their Head Coach and Ranjita Mohanty as their Manager.