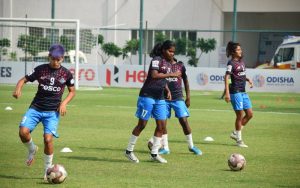 Sethu FC will look to maintain their unbeatable run when they face Odisha Police in the Indian Women’s League on Friday, May 13 at the 7th Battalion Ground. The local side will have a tough test facing the former IWL champions.

Sethu have been on a terrific run from the very start of the season, having defeated every side they have faced so far in the league. Such a run of form has made them a serious contender for the IWL title.

Ahead of the next game, Sethu FC gaffer Crispin Chettri was quite cautious, “Every game is different. It is important that we approach the game in the manner that we would like to play it.”

Chettri believes that the side from Madurai needs to work in their transition play. “We will focus match by match. We are still working on our transitions.”

Quizzed about his take ahead of the next game Chettri quipped, “We will go into the game with a positive mindset.”

Odisha Police, on the other hand, will have a stern task and head coach Shradhanjali Samantaray echoed the same, “Sethu are one of the best teams and we have to give our best to get a better result.”

She urged her team to maintain better composure, “We have to keep our defence and midfield compact so that we can have a fair result.”

Odisha Police will play Sethu FC on Friday, May 13 at the 7th Battalion Ground at 3:30pm IST onwards.