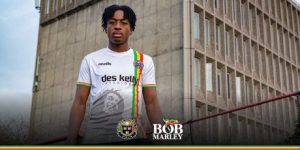 Bringing together two of people’s greatest loves, music and sport, the one-off jersey pays homage to ‘An Afternoon in the Park’, the famed Marley Dalymount concert, in its design. Featuring red, yellow and green details on the front, as well as the rear neck and sleeve trims, and an embroidered hem tag of the original concert ticket on the lower front.