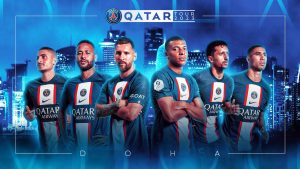 Paris Saint-Germain will travel to Doha and Riyadh on January 18/19. This tour will be an opportunity for the Parisians to meet their Qatari and MENA supporters, train in the iconic Khalifa Stadium and take part in a series of activations organized with the Club’s partners present in Qatar, such as Qatar Airways, ALL, Qatar Tourism, QNB, Ooredoo and Aspetar.

The team will fly out on January 17 to Doha then travel to Riyadh, Saudi Arabia, to play against an all-star XI from Saudi top clubs Al-Hilal and Al-Nassr. The match will be held at King Fahd Stadium in Riyadh on January 19. The team will fly back after the game to Paris.

This trip to Qatar, following the successful organization of the 2022 FIFA World Cup – is a new opportunity to shine the spotlight on the innovative features of the country’s sports facilities.

The friendly game will be broadcast on PSG TV, PSG social media and beIN Sports network.