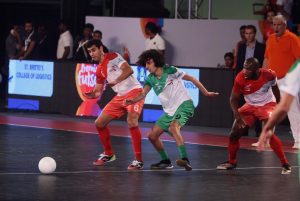 Day two of Premier Futsal in Goa saw Bengaluru 5s draw 1-1 with Kolkata 5s at the Peddem Sports Complex. The Bengaluru 5s needed a win to stay in the hunt for a semifinal spot and the result saw Kolkata seal the semifinals.

With Neto no longer in the Bengaluru squad, Tatu stepped in and did give Kolkata goalkeeper Cidao a couple of scares in the first quarter. The keeper, with his orthodox style of coming out of the box and even entering the opponent’s half to initiate attacks, was always on his toes when Bengaluru had the ball and made some fine saves.

Kolkata took the lead when they won a penalty after Hernan Crespo’s corner kick struck the hand of Maxi who was stationed in the D. Pula stepped up and fired it to the left and found the back of the net in spite of Elias diving in the right direction.

The shot simply had too much power as it whizzed past him to give Kolkata a 1-0 lead. Pula was dead set on scoring more and ended the first quarter with five shots. Even Cidao got into the act and had shots on goal that Elias palmed away with ease.

Bengaluru had some good build up play but failed to get enough shots on target. Kolkata were also guilty of simply striking the ball from a distance rather than move it around and find space.

Cidao’s forays into Bengaluru’s half almost cost Kolkata a goal when Elias launched a shot from his own area. The back-pedaling Cidao was in no position to make a save but Gabriel was on hand to back him up and head it away.

However, Bengaluru soon found the equaliser through Jonathan Piers. Cidao had parried a shot away but Bengaluru pounced on the rebound. With the Kolkata defence caught sleeping, Jonathan had an open goal to make it 1-1.
Scholes was trying his best to help Bengaluru find another and set up his teammates a few times in the fourth quarter. But no matter what they threw at Kolkata, Cidao was in no mood to concede another.

But his enthusiasm almost cost him when he punched a ball just outside the box. However, Bengaluru’s free-kick routine was disappointing and Kolkata survived and qualified for the semifinal.