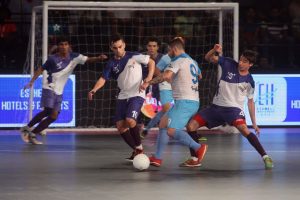 Mumbai 5s beat Kochi 5s 6-4 in a thrilling game on Day two of Premier Futsal in Goa at the Peddem Sports Complex. With Mumbai already in the semifinals, all Kochi needed was a point to qualify and ensure Chennai had no chance of finishing in the top two. But the result now gives Falcao’s side hope ahead of the final game.

The Kochi 5s took no time in taking the lead when Michel Salgado’s shot came off the post and the goalkeeper before Deives Moraes stationed at the far post tapped it in. However, Mumbai stormed right back and scored the equaliser within moments of conceding. Foglia’s quick feet and trickery saw him send two defenders the wrong way before a searing shot found the bottom left corner to make it 1-1.

But just before the hooter sounded for the end of a lively first quarter, Moraes retained the ball under pressure from three defenders and took the right moment to flick the ball back to Chaguinha who fired home beat Luis Amado and make it 2-1 to Kochi.

Kevin Ramirez made it 2-2 three minutes into the second quarter when his own throw-in was deflected into his path just outside the D. A powerful shot saw Casalone get his angles wrong as the ball rifled the net. A vociferous celebration followed as just minutes earlier Ramirez was having his ankle strapped up after twisting it in the first quarter.

The goals continued to flow as Devies Moraes got his sixth of the tournament after a sublime cross-field pass from Chaguinha. Ramirez was caught sleeping allowing Moraes to steal past behind him and finish calmly to give Kochi the lead. But just at the stroke of half-time, Foglia got his second of the night with a poacher’s goal. Casalone parried a shot right into his path and he couldn’t recover fast enough to make the save.

Mumbai then struck twice towards the end of the third quarter to take the game away from Kochi. Chanpreet scored his first goal of the tournament when he stationed himself in front of the goal and simply tapped in Foglia’s cross. Moments later, Angellot found himself in a one-on-one situation with the goalkeeper on a counter-attack and beat him with ease to make it 5-3.

Halfway through the final quarter, Chaguinha and Moraes carved open Mumbai’s defence with a neat one-two and Chaguinha grabbed his second of the night with substitute goalkeeper Federico Perez unable to get in the way of his effort. Though he made some fine saves, he lost his bearings and conceded a handball which saw Amado come back on for the final play.

Moraes stepped up to take the free-kick without a wall but Amado made a superb block and Mumbai soon countered to make it 6-4 through Manikkoth.