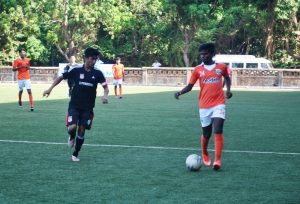 Sporting Clube de Goa went down fighting by 1-2 margin in extra time to Pune FC in the semifinals of the Bandodkar Gold Trophy Football Tournament played at Duler stadium in Mapusa on Monday.

In a well contested first session the teams went into the breather locked in a 1-1 draw. Nigerian Ndidi Chukwuma(3rd minute) put Sporting Goa ahead, while Buanthanglun Samte (14th minute) equalized for Pune FC.

In the very 3rd minute of the match Pune’s Rajat Kumar was caught in act of coming with a reckless challenge on Sarineo Fernandes inside the danger zone right in front of the eyes of referee Anthony Simoes, who without any hesitation pointed to the dreaded spot.

Sporting’s Ndidi Chukwama made no mistake to score by sending the rival keeper the wrong way. Sporting Goa had two more chances to further enhance their lead in the 8th and 10th minute of play, but Moises D’Sa and Ndidi Chukwuma failed to beat the Pune keeper Anuj Kumar in one to one situation.

Pune FC caught the Sporting Goa defence napping in the 14th minute, where their skipper Mohammed Yasir sent a delightful pass to unmarked Buanthanglun Samte who entering the penalty box sent an adroit placement to make if 1-1.

The next 15 minutes of the match was restricted to midfield with both the teams reducing the tempo of the match. However in the 34th minute, Pune’s Mohammed Yasir sent an intelligent through pass to Omega Vanlalhruaitlvanga who was brought down by Sporting Goa’s Franzil Negredo inside the danger zone, with this time referee awarded a penalty in Pune FC’s favour. Goal scorer Buanthanglun Samte, saw his strike from the penalty spot being brilliantly saved by keeper Sherwin DaCunha to the dismay of his team mate.

Five minutes before the breather and the highest goalscorer for Pune FC Ashique Kuruniyan getting hold to a pass from overlapping stopper back Rajat Kumar drilled a low shot which was pushed for a corner by keeper Sherwin with a full stretched diving save.

At the other end Sporting Goa keeper was equal to the task as he paired the ball over the crossbar from a close range shot by Omega Vanlalhruaitlvanga off a pass from Lalawmpuia. In the 75th minute Sporting Goa’s Daryl Costa collected a long pass from Quan Gomes raced forward with the ball hoodwinked defender Rajat and onrushing keeper Anuj but to everyones surprise placed the ball past the side post.

In the 87th minute Pune FC’s keeper Anuj Kumar came with a breathtaking save to block Daryl Costa header from inside the 6-yard box off Akeraj Martins cross.

It was Sporting Goa keeper Sherwin at the other end in the 89th minute managed to fist the ball for a corner off a hot blooded shot from Ashique Kuruniyan just inside the penalty box.

With regulation time ending in a 1-1 draw, twenty minutes of additional time was played. In the 105 minute of extra time Pune FC’s skipper Mohammed Yasir drilled a scorching 25-yard free kick which crashed to the top corner of the goal, 2-1.

In the closing stages of the match Pune were awarded another penalty kick, after Sporting Goa’s Shawn Noronha brought down Omega, who however shot out from the penalty spot.

The finals of one of Goa’s most prestigious and historic football tournaments – Bandodkar Gold Trophy Football Tournament is set to be held tomorrow evening where Pune FC will taking on Dempo SC at the Duler Stadium in Mapusa at 7pm.