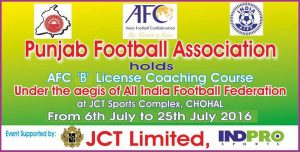 The Punjab Football Association in close association with the Asian Football Confederation (AFC) and the All India Football Federation (AIFF) along with event supporters JCT and INDPRO Sports is going to conduct its first ever AFC B License Coaching Course in Punjab in July 2016.

The Coaching Course will be held at the JCT Sports Complex in Chohal, which is in Hoshiarpur district in the state of Punjab from July 6 to 25, 2016.

@Arunfoot
Previous VIDEO – 442oons: France vs Romania in under 60 seconds!
Next UEFA disgusted by Marseille violence, open proceedings against Russia!