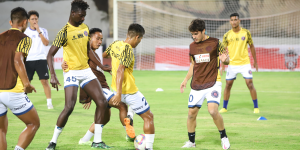 The I-League is all set to make its much-awaited return to the iconic Ambedkar Stadium in the national capital as hosts Rajasthan United FC face off against NEROCA FC on Saturday, December 3.

The fixture promises to be an exciting one as both teams head into the match high on momentum. The Desert Warriors are unbeaten in their last two matches, picking up a 3-1 win against Sudeva Delhi FC in their previous game. NEROCA registered three points in their last match, defeating Mumbai Kenkre 1-0 on the road.

The head-to-head record between the two teams favours the home side, with both teams having faced each other twice last season, and Rajasthan racking up a 2-0 win in their most recent encounter. The other match ended in a 1-1 draw.

Rajasthan United head coach Pushpender Kundu shared his team’s excitement ahead of their first match at home. He said, “We will have the home advantage tomorrow against a strong team like NEROCA FC. The team is excited to play in front of our home fans, especially after two years of restrictions due to COVID-19. The boys are hungry to get the three points. We want to play as we have been in the last two matches and put on a good show.”

Midfielder Martin Chaves, who won the Hero of the Match award against Sudeva Delhi, said, “It’s an exciting prospect to be playing at home in front of our fans. At the same time, it is important we start our set of home games with a win. Our target for tomorrow is go for all three points.”

NEROCA FC head coach Khogen Singh praised his opponents and mentioned that he is expecting a tough match. “Rajasthan United are a well-run club and have a lot of quality players. We want to carry forward our momentum from our last game and make changes in our strategy as per our opponents. Our plans are ready and we hope that the match will be exciting. We feel we can go for the win,” he said.

Midfielder Sardor Jakhonov, who was signed in the summer transfer window from Rajasthan United and even scored against NEROCA last season, shared his thoughts on the league. He said, “My experience in Indian football has been very good and I like it here. All matches are difficult and the Indian players are quite strong and have a lot of quality. Now that we are back to home and away matches, it is exciting. We are training well ahead of tomorrow’s match and want to win.

The match between Rajasthan United FC and NEROCA FC will kick off at 2pm IST, and will be broadcast live on Eurosport and Doordarshan Sports, and streamed live on the Discovery Plus OTT platform.