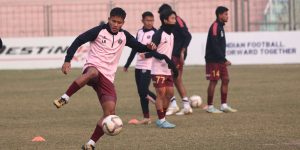 I-League leaders Sreenidi Deccan FC visit the capital to face a stern challenge from Rajasthan United FC at the Ambedkar Stadium on Wednesday, January 11 with kick off scheduled at 7pm IST.

Sreenidi Deccan FC are in fine form, heading into this game on the back of three clean sheet victories in a row. Last time out, the Deccan Warriors beat Mumbai Kenkre FC 1-0 with a goal from Afghan midfielder Faysal Shayesteh to kick off the new year. They will want to keep that run going after second-place RoundGlass Punjab closed the gap to two points following their win over NEROCA FC.

Sreenidi Deccan head coach Carlos Vaz Pinto said, “We did well against Kenkre, but this game will be a different story. We face one of the best teams in the league. We faced them in the pre-season in Odisha, and we know about their style of play.”

The Portuguese added that Delhi’s cold weather will not be a problem for his side. “It’s more difficult to play in hot conditions. It’s what my experience as a coach and also as a player has taught me. So the weather isn’t something that should cause us trouble, and our focus is only on the match,” Pinto said.

Rajasthan United FC began the year with a 1-1 stalemate against Mohammedan Sporting Club with captain Joseba Beitia’s late penalty rescuing a point for the Desert Warriors. Rajasthan United have managed to score just five goals in the previous six games, while keeping just two clean sheets in the entire season. They will need a big performance on Wednesday if they are to take points off a high-flying Sreenidi Deccan side. 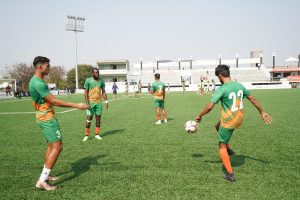 “Sreenidi Deccan are on top of the table, which means they are performing really well. They have a good group of players with a good coach, but my boys are ready,” said Rajasthan United head coach Pushpender Kundu.

“We are also known as the giant killers. If we are able to beat the table toppers tomorrow, the dynamics of the table will change. It will also give the boys an added boost for the rest of the season,” Kundu added.

The match between Rajasthan United FC and Sreenidi Deccan FC will be broadcast live on Eurosport and Doordarshan Sports and streamed live on the Discovery Plus OTT platform.