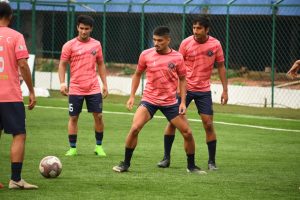 After fierce competition between the nine teams that entered the I-League Qualifiers 2021, Rajasthan United FC and Kenkre FC remain the last two teams standing as they prepare to face off in a summit clash where the winner is poised to secure the prized I-League first division berth. The odds weigh in Rajasthan United FC’s favour, who will go through to the I-League in the event of a draw thanks to their two-point lead over Kenkre FC heading into the final matchday. The match will be telecast live on the 1Sports broadcast network and streamed live on the 1Sports Facebook page at 3pm IST on Saturday, October 23.

Rajasthan United FC enters into the final matchday as the only undefeated side in the competition. Prolonging this envious record by one more game will see the side from Rajasthan become the first team from the desert state to ever play in the I-League. With their sights set firmly on the target, Rajasthan United FC head coach Vikrant Sharma spoke about his squad’s mental state before heading into the crucial final fixture.

“It is a big match tomorrow, but I always tell my players to no get overwhelmed with pressure. Football is a big part of our lives, but it is not everything in life and no matter what, tomorrow’s result will not be the end of the road for us. My message to the players is to just enjoy the moment and have fun in the match tomorrow. It is already a big achievement to find ourselves in this position, so we must enjoy every bit of it.”

“From the day we started our training in pre season in Goa, I could see the hunger in the approach of our players. The boys were working hard together in training, bonding together off the pitch, having their meals together and other such positive signs like that. Having years of playing experience myself, I could see the hunger in the players’ eyes. So this kind of an approach eases the nerves to a big extent before such a big occasion,” said Vikrant Sharma.

The Rajasthan United FC head coach also took a moment to praise Kenkre FC as went on to commend the side from Maharashtra as worthy opponents for the final. He said, “Kenkre FC has reached up to this stage so there is no doubt that they are a very good team. They like to play with short passes and constructive football, so it is good to watch them. They are not just there for the sake of it and are actually trying to play beautiful football, so it will be a good match against them.” 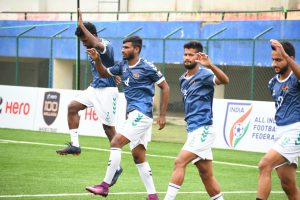 With one win and one draw in the final round, Kenkre FC is in a position where the side must secure a win to go through to the I-League. The gravity of the occasion tomorrow is not lost on head coach Akhil Kothari, who said in the virtual pre match press conference that the faceoff against Rajasthan United FC is going to be the biggest match in his coaching career thus far.

“Tomorrow will be a big match not just for me, but for Kenkre FC as a whole as well. Any competition you go to and whenever it comes to promotion or whenever it comes to winning a tournament, the game is always important. As a team, we are focussed and aware of the importance of tomorrow’s game. We will stick with our game plan and approach the match just as we do for all our matches and try to secure the three points tomorrow,” said Akhil Kothari.

Speaking about the prospect of facing the undefeated Rajasthan United in the final, Kothari said, “I have maintained from the start that no teams are to be taken lightly in this competition. This has been a tricky competition when it comes to the league in a round robin format. So we will approach it in a positive way and we must go for the three points as dropping points is not an option. It will be a big boost for Maharashtra to have a team playing in the I-League club so we are hoping we can make our fans and our club proud.”

Kenkre FC skipper Alazhar Delhiwala stressed the importance of making a fast start to the match tomorrow as his side must force the issue to secure the desired result. He said, “We will look to make a positive start to the game and take the game to our opponents as it is a make or break situation for us. After that, we hope our performance is good enough to win us the three points and take us into the I-League.”