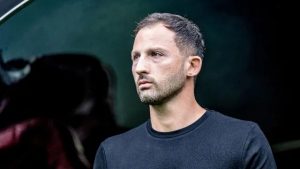 RB Leipzig have parted company with Domenico Tedesco with immediate effect. This is the result of in-depth discussions following the 1-4 home defeat to Shakhtar Donetsk in the UEFA Champions League on Tuesday evening.

Assistant coaches Andreas Hinkel and Max Urwantschky will also be relieved of their duties. The club will provide information on the successor in due course.

RB Leipzig CEO Oliver Minzlaff said, “The decision to part ways with Domenico Tedesco was a very difficult one for us. We had a very successful second half of last season under his tenure and we qualified for the Champions League. Under his leadership, we also won the DFB-Pokal, our first major title, and he was part of the most successful season in our young club’s history.”

“For this, Domenico and his coaching staff deserve our gratitude. Domenico is a fantastic coach who will have a lot of success in the future. However, after our mediocre start to the Bundesliga season with five points from five games, along with the recent defeats to Eintracht and Shakhtar, we believe that a change of management is the right course of action to turn things round quickly.”

“Our priority is RB Leipzig and we have goals that we want to achieve. We have therefore come to the conclusion that we need a change within the club. We regret that we are going our separate ways and we would like to thank Domenico for what he has achieved. We wish him nothing but the best for the future.”

Domenico Tedesco took over as RB Leipzig head coach on December 9, 2021. Back then, the team were 11th in the league table, seven points adrift of the UEFA Champions League places.

He got the side back on track and RB Leipzig were the best team in the second half of last season, collecting 36 points (42 goals scored, 15 conceded). That saw the club end the season in fourth to qualify once again for the Champions League.

Tedesco also made it to the semifinals of the UEFA Europa League, where RB Leipzig were knocked out by Glasgow Rangers. The 36-year-old will also go down in history as the coach to win the club’s first major trophy. Leipzig won on penalties in the 2022 DFB-Pokal final in Berlin against SC Freiburg on May 21, 2022.

Having averaged two points per game last season, Tedesco only picked up five points from the first five league games this around, and then suffered a heavy 1-4 defeat to Shakhtar Donetsk last night in the first group game of the new UEFA Champions League season.

The first day of Matchday 1 of the #UEFAChampionsLeague has resulted in two coaches being fired. #ThomasTuchel at #ChelseaFC & #Tedesco at #RBLeipzig

What upsets will happen tonight? And who is at risk of being fired 🤔