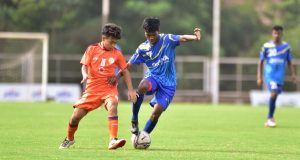 RoundGlass Punjab FC were crowned champions in the U-15 category of the JSW Youth Cup, having triumphed with a 1-0 victory over Odisha Sports in Bellary on Monday, May 16. Stephen Ngurchhuanmawia was the hero for the side from Punjab as he netted the only goal of the evening.

It was a cagey first half, with both teams struggling to create chances in the opening stages. Odisha Sports and RoundGlass Punjab played it safe for most of the first period, as a majority of the battle was restricted to the middle of the park.

The first chance of the game came from Abhinash Kishan from Odisha Sports, who cut in and took a shot from distance that was hit with power, and rattled the crossbar before coming back into play. Only a few seconds later, Odisha almost broke the deadlock with Bhenketeswar Oram’s shot from distance, but his effort was wayward.

Into the second half, RoundGlass Punjab came out firing and scored within two minutes of the restart. A through ball for Stephen helped the forward break through the lines, round the goalkeeper and pass it into an empty net to make it 1-0 to RPFC.

Odisha Sports saw another effort hit the crossbar, but a resilient RoundGlass Punjab FC defence ensured that the clean sheet was kept intact through till the final whistle.

The result meant RoundGlass Punjab FC’s second JSW Youth Cup triumph, with the side from Punjab having won the U-18 edition last month.

420 Grams’ Jaydeep Basu, recently named on the Committee of Advisors to assist in the …