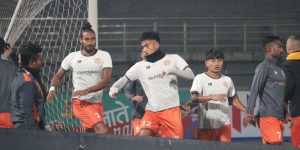 If RoundGlass Punjab FC needed any extra motivation to start 2023 strongly, table-toppers Sreenidi Deccan provided that on Saturday afternoon, beating lowly Mumbai Kenkre FC. As a result of that win, the gap between RoundGlass Punjab and Sreenidi Deccan is now five points and Staikos Vergetis’ side cannot afford to drop points here on Sunday against NEROCA, who have struggled so far in this season of I-League.

The home team has one of the strongest defences in the competition, and that defence has got further reinforcement in the form of Suresh Meitei, who could not join the team earlier because of formalities. Head coach Staikos Vergetis recognised his value in the pre-match press conference on Saturday, adding he is not expecting an easy match even though NEROCA are in the relegation zone at the moment. “They don’t deserve to be so low on the table,” he said. “I think they will have better results in upcoming games. They play good possessional game. It will not be an easy match for us tomorrow.”

The Greek coach’s hopes of scoring will as usual rest on his Slovenian striker Luka Majcen, who has scored in all of RoundGlass Punjab’s home games. They have not been a high-scoring side, with all five wins coming by a one-goal margin. That explains Vergetis’ cautious approach against the side from Manipur. 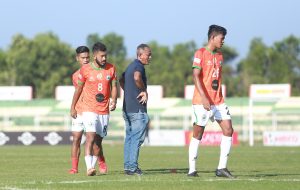 NEROCA head coach Wangkhem Khogen Singh has fond memories of this ground as he had a triumphant I-League campaign with Minerva Punjab in 2017-18. “It feels good to be back here,” he said. The man is aware of the potential of his own side as well as the strength of the hosts. Inability to finish has dogged NEROCA this season, having failed to score in four of their last five matches. In all, they have scored just four in nine matches. Singh said he is hoping that will change in the new year.

Goalkeeper Shubham Dhas, sitting with the coach, pointed out the same thing. “We haven’t conceded too many goals. But now we need to score more ourselves.” He admitted that RoundGlass Punjab are a tough side to play against, but said they were not looking at anyone as a specific threat. “Punjab are a good side. Anything can happen against them but we will try our best tomorrow. We didn’t start the season well but hopefully we can improve now,” said Dhas.

RoundGlass midfielder Khaiminthang Lhungdim is a former NEROCA footballer. Therefore he is aware of the threat Sunday’s opponents pose. He said, “We’ll have to stick to our plans if we are to pick up three points as they are a good side.”

With almost all the coaches saying the winter break has done their footballers a world of good, teams like NEROCA can hope to start afresh as the league moves towards the business end. For the same reason, teams like RoundGlass Punjab, sitting up the table, need to be wary of surprises.