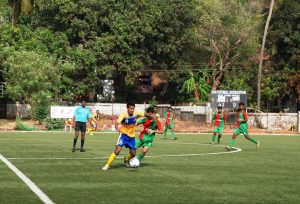 The Salgaocar lads were their usual attacking best as they kicked things off in high gear right from the start. Jason got the first goal in the 5th minute. Just 2 minutes later Naro began his haunting of the Goa Velha defence just 2 minutes later as he doubled the score from Harmanjot’s cross from the right. In the 11th minute Myron started his scoring after Naro showed some skill raising the ball over a defender for the former to score. Liston wasn’t far behind as he added his name to the score sheet scoring the 4th goal of the game in the 16th minute. In less than 2 minutes Naro struck again from another clever Harmanjot cross which only had to be taped in. Liston scored his 2nd & the Greens’ 6th after combining well with Myron to outdo an offside trap in the 23rd minute. Myron was up next with a bullet from the edge of the box just 2 minutes later. The game seemed to have slowed down as the Vasco outfit retained most of the possession as the Goa Velha lads tried their best to come up with a threatening attempt. In the 39th minute the Salgaocar got the 8th goal as Liston just lobbed it over the opposition’s custodian. Naro completed his hat-trick dribbling past the keeper in the 43rd minute. As it looked like the referee would call for lemon-break Myron too completed his hattrick and inflated the tally to 10-0.

The second half saw some substitutions for the Greens that also made an impact. In the 52nd minute Naro signed off as Liston intercepted the ball from the goalkeeper’s clearance to let the former score. Myron struck again in the 67th minute followed by Harmanjot in the next 3 minutes. Denil and Ronaldo who were substituted also scored in the 76th and 86th minute to completed the 15-0 defeat of Goa Velha SC.