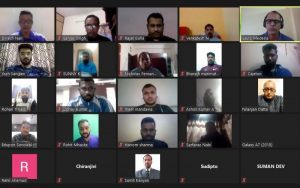 The third AIFF Online Goalkeeping Introductory Certificate Course is set to take place from Friday, November 27 and will run for two-and-a-half days, with a total of 60 candidates taking part in two batches. Mr Gumpe Rime & Mr Dinesh Nair will be the lead instructors for the first and second batch, respectively.

The course was initiated after the lockdown imposed due to the COVID-19 pandemic and with the completion of this latest edition, the total number of candidates to have completed the course will be 150. According to AIFF Head of Coach Education Mr Savio Medeira, the response received for the goalkeeping course is a ‘great motivation’ and is creating a bigger pool of coaches who can opt for specialized coaching licenses in the future.

“Every time we open the window, we get over a hundred applications to choose from. That itself shows the interest levels and hunger among coaches to get more knowledge, especially in a specialized position such as goalkeeping. Such level of interest was not there in the past and the response now is good and is a great motivation to continue organizing such courses,” he said.

Medeira, a former Indian senior national team player and head coach, continued, “Now, we will have a greater pool of coaches who are getting such specialization and it is up to them now to continue working on the knowledge shared with them by the educators. They are getting an understanding of the basics. The overall number is growing and the base is growing. It is great for us going ahead.”

He mentioned that after every course, feedback is collected from every participant and so far, it has been positive.

“We take regular feedback after each course and it has all been positive so far. With the course being a pre-requisite for the higher levels, everyone is now and eager to start the on-field courses once they resume,” he stated.

The participants for the course are as follows: