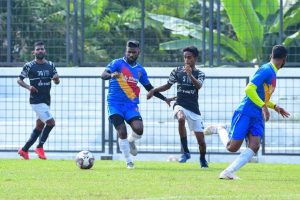 SC East Bengal breezed past Vasco SC 3-1 in their first pre-season friendly at the Don Bosco Ground in Goa on Friday morning.

Semboi Haokip, Subha Ghosh and U-20 developmental player Siddhant Shirodkar were on target for the red and gold brigade.

SC East Bengal head coach Manolo Diaz gave starts to Sankar Roy in goal with Raju Gaikwad and Joyner Lourenco playing at the heart of the defence. Sarineo Fernandes and Ankit Mukherjee were the full backs as Lalrinliana Hnamte and Sourav Das pulled the strings in midfield in a 4-4-2 formation.

Both teams were keen on testing each other out in the opening exchanges as Diaz looked to chop and change in a bid to test his squad.

After a spell of sustained possession, SC East Bengal went ahead riding Haokip’s sharp header. A delectable Hnamte ball inside the box was headed into the path of Haokip by Akashdeep Singh who came in for Ankit. Haokip kept his composure from close range to get the better of Luis Barreto in Vasco SC goal.

With two minutes to half-time, Subha shimmied effortlessly into the box but his shot fizzed just wide of the post.

Naorem Mahesh, in for Romeo, made a buccaneering run into the Vasco SC area to cross the ball for Subha who made no mistake from close with an easy tap-in.

Diaz added solidity on the flanks with the introduction of Hira Mondal and the left-back did not disappoint, cutting inside on one occasion to make a darting run goalwards. Mondal was rock solid in marking his opponents and produced a solid display.

Vasco SC pulled one back in the last ten minutes of the game but U-20 developmental player Siddhant Shirodkar made it 3-1 for SC East Bengal from a Mondal assist.

The team will take on Salgaocar FC on Saturday morning.

@Arunfoot
Previous India’s Sunil Chhetri: The job is not done yet!
Next LaLiga Grassroots to support and promote grassroots football around the world!