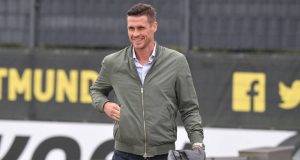 Bundesliga outfit Borussia Dortmund and Sebastian Kehl, 40, will continue their sporting cooperation going forward. The head of the licensed player division on Monday prematurely extended his contract with BVB until 30 June 2022.

“We’re very satisfied with Sebastian and will now be involving him even more closely in all sporting decision-making processes,” said chief executive officer Hans-Joachim Watzke. Meanwhile, BVB sporting director Michael Zorc emphasised that “we’ve worked together in a spirit of trust from day one. We value his work. For me, the contract extension is therefore a logical step.”

Sebastian Kehl has long been an iconic figure in Dortmund. He became champion with BVB in 2002, 2011 and 2012, and also won the DFB Cup in 2012. After hanging up his boots in the summer of 2015, the long-time team captain completed a management degree with UEFA and acquired his A Licence as a coach. Since the start of the 2018/2019 season, he has been the head of the licensed player division at Borussia Dortmund.

“I would like to say thank you for the trust that the club has shown in me,” said Kehl. “This is an important, positive signal for me. I am glad that our joint strategic and sporting path up until 2022 is now ‘set’. Despite the difficult conditions in the midst of the pandemic, I still enjoy working every day to make Borussia Dortmund a success.”