Second Division League: Bengaluru FC ‘B’ down leaders TRAU FC 2-1 in a thriller! 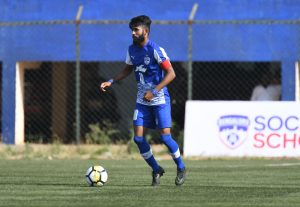 Bengaluru FC ‘B’ rode on skipper Myron Mendes’ brace (6′, 59′) to beat TRAU FC 2-1 in a thrilling Second Division League encounter at the Khumam Lampak Main Stadium in Imphal on Saturday. Princewill Emeka (72′) reduced the deficit in the second half for the hosts, but a strong defensive performance in the final quarter earned the Blues their third win of the campaign.

The result also meant Bengaluru FC ‘B’ (11 points) extended their unbeaten start to the campaign to five games and moved to the top of the Group-C standings ahead of TRAU (11 pts) on head-to-head.

Going into their third away game, coach Naushad Moosa fielded an unchanged line-up and it took only six minutes for the Blues to break the deadlock. Playmaker Robinson Singh Khumukcham, who has been deadly with his set-pieces, curled in a freekick from the left to find Myron at the far post and the skipper headed it home to give Bengaluru the lead.

Meanwhile at the other end, it was striker Emeka who was a constant threat for the hosts and went close on a couple of occasions. The Blues’ defence managed to block space inside the box, thus forcing him to shoot from range and avoid danger.

In the final minutes of the first half, Lamgoulen Hangshing almost doubled the advantage for Bengaluru FC. Once again it was Robinson’s set-piece that cause the danger, but the attacker went inches wide with his header from close range.

The hosts came all-out attack in the second half and ex-Blue Malemnganba Meitei almost got a goal back, but his effort from inside the box went just wide in the 47th minute.

It was however Bengaluru who pushed up thereafter and managed to convert their chances. Ten minutes into the second half, Moosa introduced Bidyananda Singh in place of Lamgoulen and the move instantly paid off. Bidyananda earned a corner after his shot was blocked by the goalkeeper and Robinson’s delivery from the resultant set piece found Myron, who once again met the cross with a header at the far post to double the Blues’ advantage.

TRAU pulled one back in the in the 72nd minute when Emeka headed in Reisangmi Vashum’s cross in from the left to set up a thrilling end to the game. With just one goal separating both sides, the last quarter saw some end to end action with chances falling for either side. The Blues however managed to hold on to their narrow advantage and seal a well-deserved win over the Manipur side.

Bengaluru FC ‘B’ will now host Shillong’s Langsning FC in their next game at the Bangalore Football Stadium on Wednesday, April 25.

Previous Celebrate the Heritage of the Nike Mercurial with your choice of Iconic Look!
Next Chennaiyin FC ‘B’ record first win in Second Division League, beat Langsning FC!