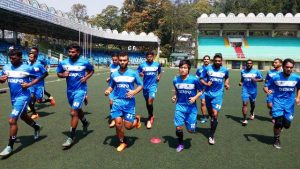 Second Division League is getting more intense with each round and Dempo Sports Club, the most decorated club in India, are leading the race right now to snatch the coveted berth in the Hero I-League 2016/17, closely followed by the debutants Minerva Academy FC.

Dempo SC, who qualified from the Western Conference behind Minerva Academy FC, embarked their final round journey in style with an enthralling win over Gangtok Himalayan SC on March 26, courtesy the sole strike from Mandar Rao Desai. Albeit they had a setback against NEROCA FC in the next outing, they recuperated pretty fast to come back to their winning ways when they travelled all the way to Chandigarh to face Minerva AFC. Following all the five matches on the road, they are now slated to host Gangtok Himalayan SC in Goa on May 5. With an intimidating attacking trio comprising of Mandar Rao Desai, Romeo Fernandes and Uttam Rai, the Goan outfit are firm favourite to come back to Hero I-League next season.

Minerva Academy FC, the only debutants from the Western Conference, grew from strength to strength to clinch the pinnacle spot from the conference. In between two goalless stalemates at the Khuman Lampak Stadium and the Paljor Stadium, they ran past the Black Panthers in Kolkata, thanks to the efforts from Sehijpal Singh and Arshdeep Singh. Their first home affair of the final round was not a fancier one when they were smitten hard by Dempo SC, courtesy the only goal scored by Uttam Rai. The Chandigarh-based side have acquired 11 points in 6 matches, 2 points shy of the leaders Dempo SC and they are now ready to host Mohammedan Sporting Club in two days.

NEROCA FC, the buoyant side who have already earned many a plaudit for their valiant brand of football in the first round, had a huge setback in the last round having suffered a defeat to none other but Dempo SC. The Imphal-based side have shared the pie with Minerva Academy FC in the first match of the final round followed by a mammoth win over Dempo SC. But the return leg didn’t go according to their plans as Shallum Pires, Felix Chidi and Peter Carvalho smacked as many as 3 goals at the Fatorda Stadium. Following this heart-breaking loss, NEROCA travelled to Kolkata where the Black Panthers handed them their second loss in the final round which dented their dream of making to the Hero I-League 2016-17 heavily. Having acquired 5 points less than the leaders, the Imphal-based club have to execute their plans amicably to get the job done.

Mohammedan Sporting Club, the century-old club from Kolkata, were on the receiving end when the FIFA Disciplinary Committee deducted three points from their kitty. In their quest for the elusive Hero I-League berth, they outplayed LoneStar Kashmir FC in Kolkata on the first day of the final round. Albeit they had to bite the dust against Minerva Academy FC on the next matchday, they came up with a resilient game against the menacing Dempo SC to earn a crucial point. After two back-to-back home wins against the North-eastern teams, the Black Panthers are now out on the road to take on Minerva Academy FC, LoneStar Kashmir FC and Dempo SC. They’ll surely look forward to churning maximum points possible in these next three matches to keep their hope alive.

Gangtok Himalayan SC, who have garnered huge home support, categorically failed to live up the expectation in the final round following a decent display in the Eastern Conference. The Imphal-based side, who play their home matches at the Paljor Stadium, have drawn three home matches against LoneStar Kashmir, Minerva Academy FC and NEROCA. They were startled initially, having humbled by Dempo SC on their first home match. With three points in four matches, they embarked upon the away trip and they were left red-faced following two successive losses against Mohammedan SC and Minerva Academy FC. In two days, a Himalayan task awaits them when they’ll face Dempo SC at their own backyard. The management will look to reshuffling their strategies to make one step ahead in their football history.

LoneStar Kashmir FC, the representative from the city of lakes, haven’t fared well so far in the final round of the Second Division League. Apart from their date with Gangtok Himalayan SC, they have always been the second best side on the field. Having earned a solitary point from five matches, the Srinagar-based side will surely look forward to signing off their campaign holding their heads high. They are scheduled to clash their swords with Mohammedan Sporting Club on May 8 and they’ll surely look to spoil the Black Panthers’ party in the beguiling valleys of Srinagar.